75 witnesses were called to trial for Cofiec case 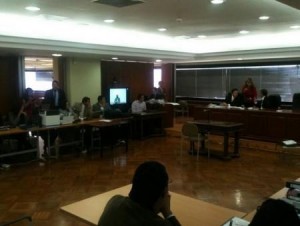 Judge rapporteur Luis Enriquez declared the hearing of trial for the so-called Cofiec Case, that is being developed this March 2 at the National Court of Justice (CNJ for its Spanish acronym) and where 75 witnesses were called, of whom 60 attended.

On behalf of private prosecution there are more than 10 defense lawyers of the processed, reported the Prosecutor´s office through its Twitter account.

Cecilia Armas, deputy prosecutor, set out the case through the presentation of testimonial evidence to prove the responsibility of 9 people involved in the crime of bank embezzlement in the Ecuadorian Financial Development Company SA (Cofiec).

In this case, the prosecution would prove the responsibility of granting a loan for $ 800,000 to Gaston D., who received the money without providing information about his incomes, estate, ability to pay or guarantees.

According to the prosecution, the loan would have been approved under some irregularities by the alleged pressure of Pedro D., Chairman of the Management Unit and Implementation of Public Law of the Trust AGD-CFN No More Impunity, (Ugedep), through Francisco E ., who would have threatened the staff of the creditdepartment for the delivery delay of the amount and with the support of Antonio B., who allegedly authorized the alleged transaction.

Assembly spent on cars, events and communication campaigns in the last year