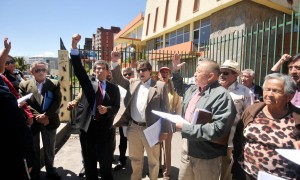 The demand for partial inconstitutionallity to the law of Labour Justice and Recognition for Work at Home, filed on May 7 by the Ecuadorian Labour Parliament, was declared admissible by the Constitutional Court (CC) on July 17 and notified five days later, said Fernando Ibarra, president of the union.

According to the admission chamber of the CC, the unconstitutionality was raised to 6 items of legislation and the only General Provision, which was published in the Official Gazette on April 20, including: limits on the distribution of profits and that the State will be the subsidiary and will guarantee the payment of social security pensions only when the IESS does not have the financial resources. Before the adoption of this law, the state contributed with the 40% of retirement pensions.

The providence of the CC must be reported to the chairs of the Assembly of the Republic as well as the Attorney General, to intervene “defending or challenging” the constitutionality of the law.

Ibarra said that the three institutions must respond in writing until Friday August 7, prior to the development of an audience.

Indigenous march came out from Tundayme