A penny in the pocket is like having nothing 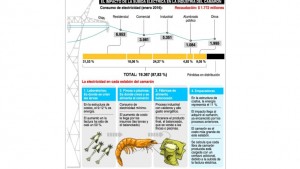 A penny in the bank is like having nothing. A penny on the shopping list is like not paying anything. The copper coin to which the ordinary citizen does not pay any attention becomes a fortune when talking about shrimp in Asia.

The competition in the Asian market -an area of immense aquaculture production- is so tight that one more penny becomes a concern for the industry.

Asia produced in 2014 a little more than 3 million tons of shrimp: around 6,600 million pounds. Faced with 609,000 tons of supply of Latin America, of which nearly the half leaves the Ecuadorian pools.

And precisely this penny is the one that makes more expensive a pound of produced shrimp, after the government withdrew the subsidy on electricity for industries.