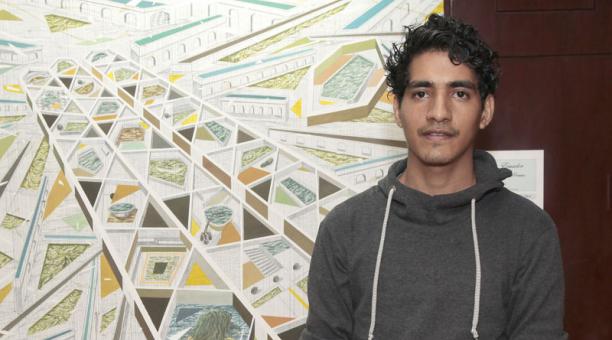 ‘Physis’, a word to designate nature in ancient Greek, gives the title to the defragmented landscape of the winning work of the sixth International Biennial of Painting of Guayaquil, which won the USD 10,000 of the first prize of the contest.

The painting of Andrés Velásquez Dután plays with architectural plans and superimposed geometries, inspired by the ancient aqueducts of Rome. With the work, the Ecuadorian artist delves into the exploration of the relationship between architecture and power, a theme that marks his work.

Physis is part of the exhibition of the Biennial of Painting that this year had as a theme water, an exhibition that will remain open until the end of May at the Museum Luis A. Noboa Naranjo,

There are 81 works exhibited of 153 paintings from 20 countries and three continents presented this year at the event. The second prize, of USD 3 000, went to the Panamanian artist Octavio Arosemena, for the work Latin American spectator looking at the birth of life, a celestial and abstract canvas where the appearance of a primordial fish is suggested.

The international jury of the Biennale -undertaken by the artists Gino Orvieto, Fernando Coral, Arístides Ureña and by the gallery owners Madeleine Hollander and Mirko Rodic- also granted four honorable mentions and the museum gave a special mention.

The works in the exhibition include landscapes and placid visions, even nudes, about water, paintings about pollution, even surrealism and abstraction.

The winning piece, with predominantly cold colors, shows the labyrinthine latticework of a kind of city where channels and fountains appear, a set of perspectives that can disguise and confuse the spectator but, at the same time, appeals to the visitor.

“There is a need to disrupt reality, to defragment the landscape in a superposition of images; as I go painting, I find that each fragment is a universe of possibilities, “said the 28-year-old Guayaquil artist.

The painting, in graphite and acrylic on canvas (150 by 150 centimeters), also uses acrylic paint in watercolor, to describe in green tones the tanks and water corridors in the work. “The aqueduct in Rome took the water to private homes and to the city’s fountains, I’m always wondering how the social position influences access to this type of resources,” said Velásquez, a graduate of the Higher Technological Institute of Arts of Ecuador ( ITAE), now a final year student at the University of the Arts (UArtes).

“My work explores architecture, urban, historical and social processes, questions of hierarchy and the architecture of power throughout history,” Velasquez says.

His first individual exhibition dates from 2016, within the framework of Residencia 103 M, directed by the Cuban-Ecuadorian artist Saidel Brito, professor at the University of the Arts.

Now he prepares two individual exhibitions, one with small-format pieces and another with paintings and sculptures, in which he hopes to include hundreds of small glass dragonflies, works in which he continues to build on his personal vision of architecture in conjunction with art. (I)

Richard Carapaz climbs to sixth place in the standings