According to the report, Vinicio Alvarado’s company had Odebrecht as a client

The State Prosecutor’s Office opened a preliminary investigation against two ex-officers of the Correa government for alleged unusual movements of their companies. Vinicio Alvarado assures that the figures are distorted.

After the denunciation of Fernando Villavicencio in several means of communication against the brothers Vinicio and Fernando Alvarado, the State Attorney General’s Office yesterday opened an investigation based on the report made by the Financial and Economic Analysis Unit (UAFE) on alleged movements economic “unusual and unjustified”.

This unit, which belongs to the National Secretariat of Intelligence, investigated the brothers since October of last year, mainly for their financial, corporate and family activities between 2010 and 2017. A cross-checking of information was made between the UAFE, the Registry Office of Public Data, the Internal Revenue Service (SRI) and the Superintendence of Companies.

The 62-page report is already in the hands of the State Attorney General’s Office. The document details the movements of 25 companies and businesses allegedly carried out by the Alvarado family in the period analyzed.

The report mentions, for example, that Vinicio Alvarado, who served most of the previous government as secretary of the Public Administration, had revenues of $ 955,000, while his brother, who worked as communications secretary and head of tourism, reported income of about $ 240,000.

These figures are multiplied when crossing data with companies related to them. Creacional, an advertising company linked to Vinicio Alvarado, had revenues between 2010 and 2017 for $ 124,626,838. The UAFE reveals that the movements -together with the other companies- amount to $ 130’296,579. It is also evident in the analysis that among the clients of Creacional was the Brazilian construction company Odebrecht, which wove a network of bribes in Latin America.

In 2013 the company paid for the services of Creacional $ 188,499 and in 2014, $ 205,222. Likewise, its clients also include public entities and high-profile private companies, such as the Prefecture of Guayas, General Motors, Cervecería Nacional, Holcim, Sony and Sek University. It was also mentioned in the technical report that between 2010 and 2017 there were money transfers to countries such as Argentina, Chile, Namibia, Ireland, the United States and Singapore.

Carlos Baca Mancheno, prosecutor, indicated that the investigations will help to clarify the existence of unusual or unjustified movements. He affirmed that this report will become an indication element. However, he clarified that this document “is neither final nor final”.

Due to the publication of that report in the main media of the country, Vinicio Alvarado said through his Twitter account that this “infamous scandal” is a “perverse attempt to intimidate the political electoral moment” with “distorted figures” of the billing of your company. He said that in the future he will deal with this issue through legal channels.

Instead, the activist Fernando Villavicencio asked the Office of the Prosecutor to begin a preliminary investigation to clarify these movements. He said during an interview on television that the control body should not only investigate the Alvarado brothers, but also his family and the aforementioned companies. 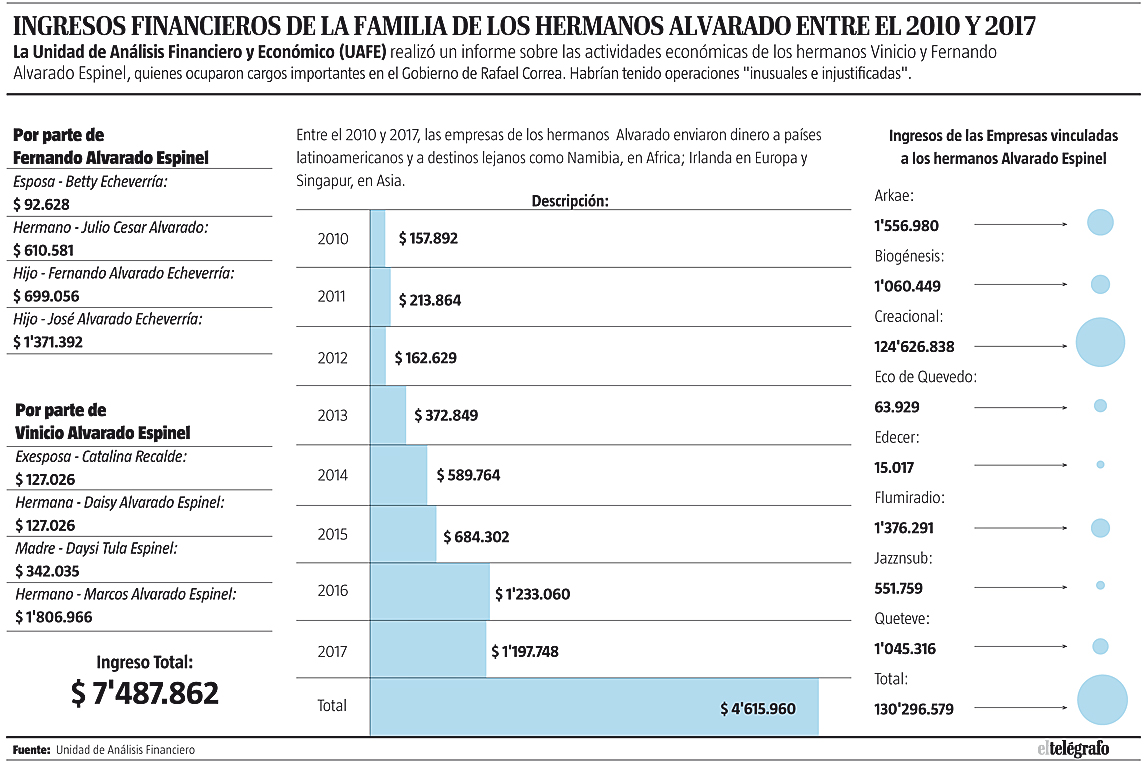 Prosecutor Carlos Baca Mancheno said that he will initiate an investigation into the UAFE’s complaint, respecting the right to due process and self-defense. The statements were given in an interview to Democracia radio.

98 percent of the Creacional company, which was born in 1986, belongs to Vinicio Alvarado.

The 1% of Creacional belongs to Daisy Espinel, mother of the Alvarado. Other family members work there.

Assembly members will be vigilant in research

The vice president María Alejandra Vicuña during an interview in Gamavisión and Ecuador TV referred to the financial movements made by the brothers Fernando and Vinicio Alvarado during the regime of Rafael Correa. “Nobody is persecuted, but we will never cover anyone,” she said. She insisted on the need to make transparent the actions in all State portfolios. She acknowledged that the National Government respects the independence of functions to carry out such investigations.

On the other hand, the opposition legislators and also of the pro-government caucus called on the State Attorney General’s Office to comply with due process during the investigation of these financial movements. Eliseo Azuero, of the National Integration Block (BIN), clarified that these “unusual” movements were an open secret in public opinion, since “they took advantage of their status to generate fortunes for themselves and their families.”

The legislator of CREO, María de Lourdes Cuesta, regretted that for 10 years the control institutions did nothing to obtain evidence. “Now as they do not have the power (the Alvarado brothers) these things come out.” Finally, María Mercedes Cuesta, from the Fuerza Ecuador movement, believes that the Prosecutor’s Office must act quickly before the accused in this investigation “leave” the country. (I)

The correísmo uses false information to have social impact