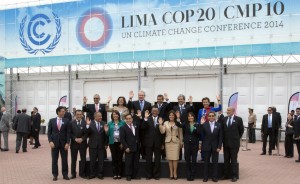 The UN Conference on Climate Change (COP20) agreed yesterday on the format to reduce emissions of greenhouse gases the countries shall assume to seal in 2015 an agreement against global warming.

The COP20 reached an agreement on the text that shall be the basis for a historic global pact next year in Paris.

“We approved the paper,” said the Peruvian Minister of Environment and President of COP20, Manuel Pulgar Vidal, after submitting the proposal to the plenary of 195 countries, which received no objections.

The text recognizes a common and “differentiated” responsibility for the countries against global warming and establishes mechanisms to deal with “loss and damage” by extreme weather events, that poor countries and islands especially suffer under that threat.

“Developed countries only ask us about reducing greenhouse gases (as input), but it is impossible for us” without investment in clean energy, said Seyni Nafou, spokesman for the African group.

The countries would announce in the coming months their commitments to reduce global emissions by 40 to 70% until 2050, a need to limit to 2 ° C the increase in global temperatures.

The spread of Ebola decreases in Sierra Leone, according to the WHO