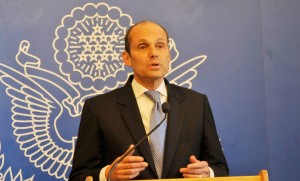 Adam Namm, US Ambassador to Ecuador at a press conference.

During his last speech as US ambassador to Quito, Adam Namm emphasized yesterday the “strong and lasting ties” with Ecuador, but acknowledged as “difficult times” the disagreements over the policies and decisions of the national government on freedom of expression and bilateral cooperation.

“Surely there are obstacles in the relationship. In the United States we support the freedoms of expression and association. For us, these are core values (…). And we will continue supporting these two values, not only in Ecuador but worldwide,” he said.

In this regard, he added that last week “the news tha Fundamedios will not be closed was very positive.”

He lamented the closure of the offices of the American cooperation agency Usaid in Ecuador and the output of the US military aid group during the three years he has served as ambassador.

The diplomat was appointed ambassador to Quito in April 2012 and came to Ecuador in May of that year.

In 2013 and 2014, the Foreign Ministry admonished Adam Namm by his public comments in favor of freedom of expression in the country.

However, yesterday at the press conference at the headquarters of the embassy, he stressed that these episodes were overcome by both governments and he proposed a more optimistic scenario, which foresees more economic and social joint projects.

Foreign Minister Ricardo Patino reported that Todd Chapman is the new replacement, and he would have received the approval of the Ecuadorian government.

5 years after the 30-S, some people consider it as a day of national mourning