Adjudication hearing is conducted against 6 police members for 30-S 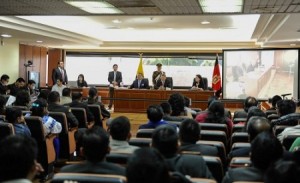 Since last Tuesday has being performed the trial hearing against 6 members of the National Police, accused of the alleged crime of assassination attempt for the 30-S case. The hearing would last about a week.

The Seventh Criminal Court of Pichincha, called 125 witnesses, of which 75 have already been called by the Prosecution.

According to Prosecutor Gustavo Benítez, the officers would be responsible for allegedly induce their companions to engage in violent acts to prevent President Rafael Correa from leaving the National Police Hospital, where he remained for 11 hours.

For the same case, the Court of Criminal Guarantees of Ambato convicted Police Colonel B.R., who was prosecuted for endangering state security.

158 applicants are disqualified to replace new judges of the CNJ