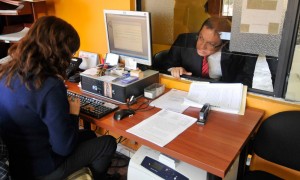 The sanction applied by the Superintendency of Communication (Supercom) to La Hora and Expreso newspapers to ask for a public apology and publish a reply to a paid advertisement “is like Coca Cola wants a replica to a paid advertisement of Pepsi Cola,” questioned the executive director of the Ecuadorian Editor Association of Newspapers (Aedep), Diego Cornejo.

He accompanied yesterday Luis Vivanco, editor of La Hora, to submit a second protective action against the Supercom.

The monitoring body determined last Thursday that the aforementioned newspapers must publish a public apology made by their managers and a reply to a paid advertisment requested by the Aedep, which was released last July 20.

Superintendent Carlos Ochoa called ‘falsehoods’ the content of that letter, in which the application of the Communications Act is referred, and he initiated further procedures.

Against this, Cornejo asked the two media to publish as established by the Superintendency “under protest,” because he believes that sanctions to which these newspapers are subjected would be destined to bankrupt them.