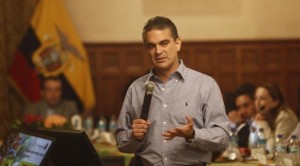 The dimensions and scopes of the agreement between Ecuador and the European Union (EU) was the reason for the meeting held by President Rafael Correa with the government block of PAIS Alliance (AP), on Wednesday October 1, in Carondelet.

Legislators of the block ensured that the concerns revolve around three aspects: the first is that in the beginning the government’s position was to leave the negotiating table with the EU in 2009, considering that the results were not designed to promote the development of the country. The second point that raised concerns was “the lack of information”, due to the agreement is still under construction. Finally, that the agreement does not constitute a adherence to the treaty signed by Colombia and Peru, and that the country has other conditions.

Another issue which was clarified at the meeting was the so-called “red lines”, which refer to the protection of intellectual property, protection to agriculture and the medicine sector.