Brazil will feature safeguard of 400,000 police and military for elections 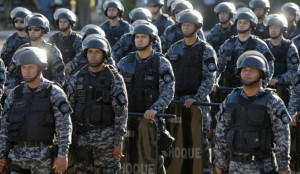 The Superior Electoral Tribunal (TSE) reported this Saturday that more than 400,000 members of the police and military are mobilized to guard the tranquility of the presidential and legislative elections this Sunday in Brazil.

Of that contingent are 30,000 troops from the Army, Navy and Air Force.

Quoted by the broadcaster Globo News this Saturday, the TSE authorized sending troops into 254 municipalities in 11 of the 27 federal states, especially the Amazon Region and Rio de Janeiro, where earlier this week there were clashes between drug traffickers and police.

On Friday, 30,000 police were deployed on the streets of Rio, of which 2,500 were exclusively devoted to the favelas of Maré complex near the international airport.

The forces of order will also be present in 5,400 polling stations in the state to prevent electoral offenses such as vote buying, political advertising within 50 meters from these centers.