Agricultural investment in Esmeraldas is concentrated in palm, cocoa and potato 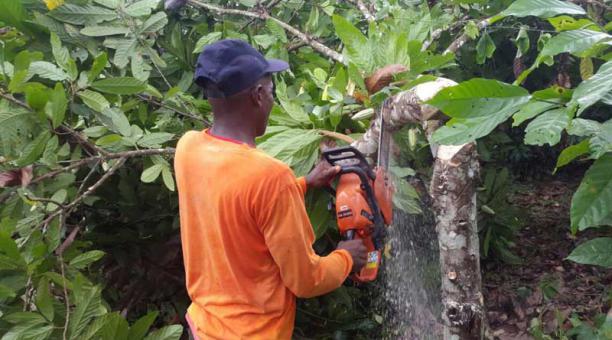 For two years, the allocation of resources for the agricultural sector of Esmeraldas grew.

Between 2016 and 2018, USD 16.6 million were delivered through loans from the state bank for reactivation after the earthquake. The state has also intervened with the support programs, through the Ministry of Agriculture and Livestock, as it has done with Carchi, Imbabura and Sucumbíos. Between the four they add USD4 million.

A third support has been from the prefectures, which promote several improvement programs for the main crops and technical assistance. According to BanEcuador, the USD 16.6 million were to boost the production of cocoa and the oil palm of Esmeraldas. Fishing is another important economic activity.

Carlos Bastidas, representative of the Cacao provincial table, assures that the approximately 80,000 hectares of cocoa in the province generate USD 48 million per year.

In contrast, the National Financial Corporation, in Zone 1 that includes Esmeraldas, allocated USD 3.8 million in 2017 for palm production in the Eloy Alfaro canton. In the case of the fishing sector, BanEcuador allocated USD 1.8 million in credits, with emphasis on Muisne, which was very affected by the earthquake.

In the six coastal cantons, 32 000 tons of fishing are produced per year, generating USD 70 million. The ports that produce the most are those of Esmeraldas, Muisne and San Lorenzo, but the latter has lost space by more than 50%, according to Paola Pérez, leader of the fishing sector of San Lorenzo.

Livestock has not taken off. “The province has not been able to export meat, as has been the proposal of the Association and the Esmeraldas cattle breeders’ corporation, given the lack of commercial agreements,” says Patricia Cabrera, president of the guild. In Sucumbíos, a large part of the local resources is mainly used for the repowering of livestock, the poultry sector and fish farming.

María Jaramillo, vice-prefect of Sucumbíos, points out that with a local investment of USD 3 million, a plant was built that produces 25 tons of balanced per day for chickens, fish and pigs.

Another important amount goes to agricultural farms, which have already benefited 12 500 families. In Carchi and Imbabura, investment in agriculture was concentrated on improvements in irrigation systems and technical assistance to boost traditional and new crops.

In the first, the income of resources improved the productivity of the potato. For Carlos Romo, head of the Provincial Agricultural Directorate, the increase is related to the high quality seed of the “superchola” variety.

The irrigation improvement projects, promoted by the Prefecture, have had an impact. In Imbabura, the production of fruits (avocados, mangoes, peaches, among others) grew in the last seven years, equaling in area to corn, the main temporary crop, which occupies 4 500 hectares, says Sherman Ortega, Productive Development Technician of the Prefecture of Imbabura. (I)

Priest accused of sexual abuse says he is innocent