Agroexportation more than a decade without diversification 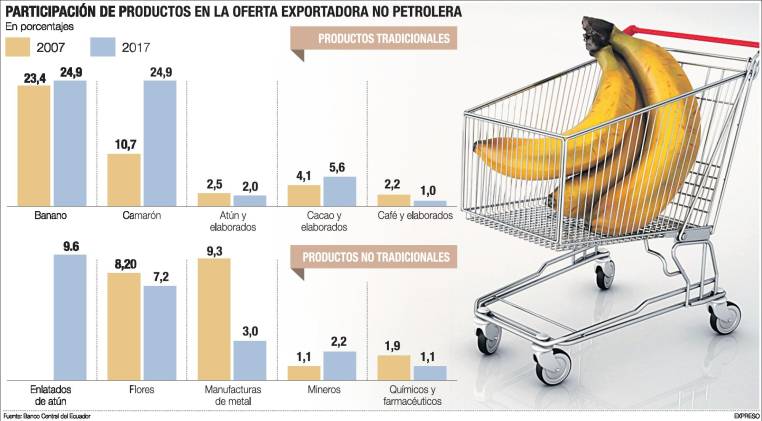 The country’s DNA is one hundred percent agricultural, but its vocation has served little to turn this productive branch into one of the country’s main sources of foreign exchange. After a decade, the contribution of this activity within the Gross Domestic Product (GDP) continues to be 9% and its external income depends, to a large extent, on bananas.

The absence of a policy that helps this sector to lower its high production costs to compete in the international market reduces the country’s options to continue diversifying its offer. According to the Central Bank of Ecuador, in 10 years the banana not only retained its dominant position but also concentrated the supply by increasing its participation from 23% to 24.9% in the export basket.

Although this performance generated more resources for the country (increasing from $ 1,302 million to $ 3,034 million in 10 years), for Nancy Celi, an expert in foreign trade, this result also reveals how the concentration level of the exportable supply aggravates with the years. “A decade ago and more, the performance of agricultural products was more balanced, but now we see how the sale of cocoa, coffee, flowers is much more static.” And that, he adds, is a sign of how little is being done at the governmental level to promote not only the export of agricultural products but also their derivatives. For her, she must start working changing the structure of land use and tenure in the country.

“Here we have serious problem. Ecuador is made up of smallholdings, small plots that prevent us from working on larger crops for export. What the State must do is a land survey, detect availability and work to give them greater value, in their optimization.” The challenge, he says, is not only to add new items, but to boost the export of derivatives of those products that are already being exported. The banana sector, how much progress has been made in its industrialization?, Celi asks, in order to answer immediately: “Nothing. The little that is seen does not have a weight in the statistics. Now that there is a tendency to offer organic products, we could take advantage of the leaves to make banana paper, to give their waste a greater use “.

The country’s agricultural sector moves $ 9,000 million each year. Of that total, says Kléber Sigüenza, president of the Chamber of Agriculture of the Second Zone, $ 6,000 million are the result of exports.

For Sigüenza, the lack of diversification in the supply and therefore the absence of new sources of income have a single reading: There are few products that are achieving competitiveness and being attractive in the international market. He argues that the interest to invest is latent in the private sector, but also a great demotivation for the high costs incurred to produce. Some, he admits, are immovable as the money that goes to labor, but there are others that could be corrected as the high cost of capital. “And that, he explains, is due to the lack of a pragmatic policy on the part of each government in office, which means that we have a high country risk and extremely expensive loans. “Our neighboring countries are deficient in rice in more than 600,000 tons, but they do not buy from Ecuador. Rather, they sell us across the border because our product is expensive.

And why? Because our farmers access loans with rates that reach up to 30%, because the machinery and inputs that must be imported must pay tariffs. ” Without capital, says Sigüenza, it is difficult for the sector to move towards an industrialization process that could allow it to export more. “The industrialization of agriculture does not reach 5%. Of the 600 million dollars that we export in cocoa and derivatives, less than 1.2% is industrialized. “From the agricultural sector, the levels of development reached by other sectors such as the aquaculture sector, which, taking advantage of high international prices and a buoyant demand, had the vision of investing in research and technological processes, are seen with healthy envy.

According to the Central Bank, in 10 years its participation in the exportable supply rose from 10.7% to 24.9%, equaling the banana and, by a spread of $ 3 million, snatching the title of being the product that has the most foreign currency by export.

To change this reality, it is necessary to change the approach with which agriculture has traditionally been seen in the country, says Francisco Swett, economic analyst and former finance minister.

“When we think about this sector, we always think of subsistence agriculture when in reality this is one of the most sophisticated industries in the world. It is not true that the export of agricultural or primary products condemns underdevelopment. “He cites the development achieved by New Zealand, Australia or California itself, based on the cultivation of simple products such as beans, avocados and asparagus. Swett wonders what the results would be if in Ecuador, the billions of dollars that were invested to change the productive matrix, would have been used to strengthen and develop this sector.

Ministry of Agriculture: “There will be more credit this year” When talking about agricultural exports, the Ministry of Agriculture and Livestock (MAG) endows this responsibility to other ministries; nevertheless, he says he is working on the bases to strengthen this sector to develop. He assures that this work is focused on the delivery of incentives for industrialization such as the return of the ISD and the exemption of taxes such as the payment of VAT on raw materials, as well as the payment of import duties that must be imported because the local market does not pay them caters “This is something that has been applied mainly to the inputs of the balanced sector such as soy cake and wheat grain,” he explains.

However, the sector expects greater liberalization in the input of inputs. Many times, they say, those that are marketed internally are more expensive than those imported and that also increases the cost of production. The same happens with credit when private banks do not add to the task of freeing loans at low costs that allow them to be more competitive.

According to the Ministry of Agriculture, from the public sector Ban Ecuador maintains a rate of 9.75% to 15%, “the lowest in the market”. Last year the monthly credit delivery was $ 80 million, for this year the plan is to increase to $ 100 million. In addition to trying to improve conditions, the MAG says it is working to promote agribusiness directly between small producers and agro-industries through training and articulation with entities such as Iniap or Agrocalidad. (I)