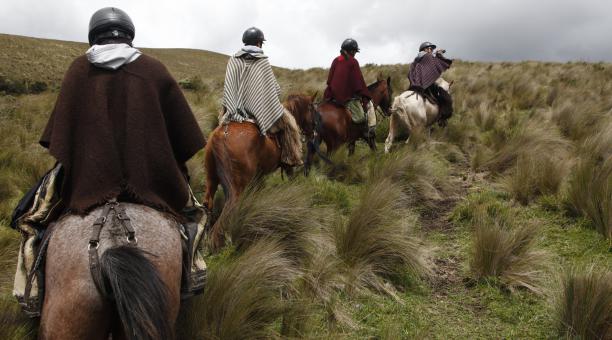 Touring the Andean moors to demonstrate the strength of Creole horses under extreme conditions is what motivated César Asipuela to explore new equestrian routes in the Ecuadorian mountain range.

After serving for 25 years to the Armed Forces, in the infantry branch, Asipuela retired and dedicated his time to equestrian tourism during the last 17 years. He is a native of Píntag and is considered a chagra who, thanks to his equestrian hobby, managed to get the English company Paramount Places to focus on him to guide foreign tourists through the national Andes.

At the invitation of Xavier Arroyo Vorbeck, Asipuela was part of the group of riders that in July 2017 traveled from Carchi to Macará in 30 days, within the Ecuador 593 project. In this adventure, one of the most complex sections to cross was the one of the Llanganates, where he managed to photograph one of his best experiences. “We were very lucky.

When we crossed, the weather turned out splendid. In a place that is known as La Cuchilla, it was possible to observe up to 11 volcanoes. The most colorful from there were the Sangay, the Altar, the Tungurahua, the Chimborazo, the Carihuairazo, the Cotopaxi, among others, “he says.

According to him, without the aid of the Creole horse, these adventures would be very difficult to realize on the Ecuadorian mountain range, because the equine acquired certain properties in its evolution since its arrival in America, as a resistance and technique to walk in the moor, despite that is small in stature.

“Quietly these horses climb to 4 200 meters above sea level. They are made for these lands. ” Asipuela also collaborates with the Quito Ecuestre organization, which includes Xavier Arroyo Vorbeck, Jaime Chávez and Ana Karina Corella, who, on the initiative of Fabián Corral, seek to improve the breeding of the creole horse. 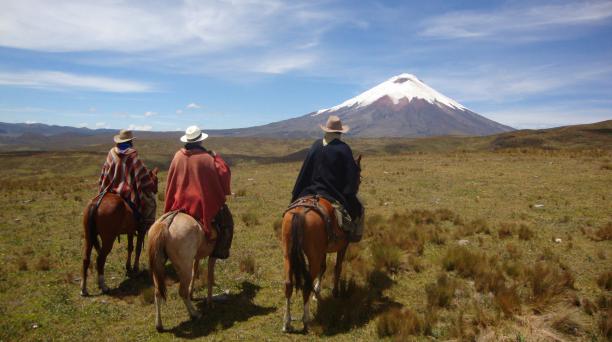 They were inspired by the crossing of Gato y Mancha, two Argentinean Creole horses that between 1925 and 1928 carried out one of the greatest feats of the time, when making a tour from Buenos Aires to New York on a trip that culminated after three years, four months and six days, in order to claim the strength of the Argentinian Creole equine.

Mancha and Gato died in 1947 and 1944, at 40 and 36 years of age, respectively. Their bodies are embalmed in the Enrique Udaondo

Provincial Museum Complex of the city of Luján, as an icon of what Creole horses are capable of. Argentina was not the only country to revalue its equine, since the first was Chile through Raimundo Valdés in 1893, an initiative that, over the years, allowed the horse to be considered a Natural Monument, after a presidential decree signed by Sebastian Piñera on April 26, 2011.

To demonstrate the strength of the Ecuadorian Creole horse, Quito Ecuestre plans to make a crossing to the Equator next summer that will connect the Amazon with the Coast by the 0 ° latitude, but avoiding the carriageways. “They are processing permits and analyzing trails,” explains Ana Karina Corella. This organization also makes several horseback rides so that the national tourist appreciates the hidden landscapes found in the Andes. Between its routes, they are traveled by the Qhapaq Ñan or Camino del Inca, around the Antisana, Ilinizas, Llanganates and Cotopaxi, the trails Lloa-Mindo, Pachijal, Mama Rumi in Bolívar and the Ruta del Sol (by the Cojimíes-Pedernales path -Jama)

The cost of the ride varies according to the destination chosen and the number of people participating. Prices range from USD 15 to 80, and includes horse rent, saddle, route guide, mobilization and food expenses. (I)