Airports Struggle to let Travelers Out 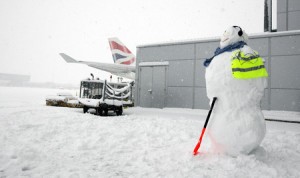 Today 1,000 flights have been suspended. The situation has improved and airports like Gatwick and Brussels could be open. However the troubles persist due the snow and accumulation of delays during the weekend.

During the morning the airport of Fráncfort and Gatwick have renewed their activities. The Brussels airport is also reactivated, meanwhile the French airport Orly and Charles de Gaulle, along with the Heathrow of London are still operative, but with some delays.

The airport of Dublin has remained close due to the strong blizzards. So far the companies have cancelled 14 flights until the afternoon.

The United Kingdom could have troubles until Wednesday according to the meteorological office of Britain, which warns about the cold and blizzards, with more snow. The Heathrow airport has only one lane open with excessive delays, but working. Gatwick continues to suffer the worst situation. The weather not only affects the air travel, but the land as well, the Eurostar train that joins London with Paris, and Brussels whose services are limited due to the snows.

Airports in Germany are improving, but the snow reaches the 40 cm of height, this has caused that roads for heavy vehicles remain closed. The airport in Fraport had over 370 cancellations with a total of 1,340 flights. On Berlin, Düsseldorf, and Munich were less intense. The weather also affected the communication lines in the last few days.

The airport of Brussels left over 3,000 civilians stranded last weekend, the antifreeze liquid is gone due to the excessive use.

In Spain there have been 86 flight cancellations according to the report of the Spanish Airports and Aerial Navigation (AENA). The Spanish airports plan to perform 4,610 flights as soon as the conditions improve.