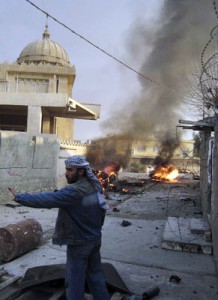 The constantly threats of Al Qaeda against Christians caused the suspension of pre Christmas celebrations in three cities of Irak.

After the bloody attack suffered in a Baghdad church, some cities like Kirkuk, Mosul, and Basora will not decorate their churches with Christmas items, they canceled the midnight Mass, and called parishioners to refrain from decorating their homes.

Christians across Irak have been living with fear since an attack on a church in Baghdad on October, which killed 68 people. Days later, militants bombed Christian neighborhoods and homes in the capital.

A group affiliated with Al Qaeda, that claimed responsibility for the attack on the church, promised a campaign of terror against Christians, this is because Iraqi militants believe that the church has trapped two women who were going to convert to Islam. The church denies the affair.

UN estimates that since the attack on the church, approximately 1,000 Christian families have fled to the Kurdish region in northern Irak, which is generally safer.