Al-Assad said that countries that support terrorism will pay

On Wednesday, Syrian President Bashar al-Assad, sworn in as president for a third term of seven years after his election victory in June. “I renew my appeal to those who were duped in order to use arms against the state to surrender, because we will not stop fighting terrorism until we restore security,” he said in a speech during the ceremony.

Moreover, Al-Assad presented the main lines of his policies for the next stage, which is not expected to change regarding the management of the conflict. In his opinion, Syria is an attack target “that does not want to affect people or the government, but the country.” He described the presidential elections of June 3 as “a bullet fired at the chest of the terrorists and those who are behind them.” 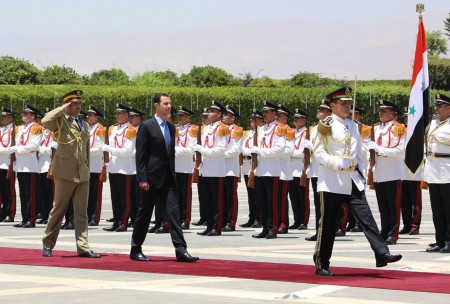 Syrian President Bashar al-Assad (mid) arrives at the ceremony of inauguration of his third term in the presidential palace in Damascus.