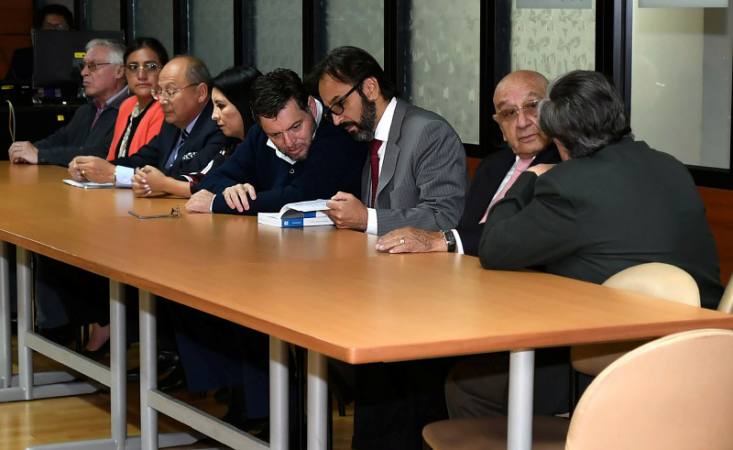 Five years in prison, public apologies for the crime committed and the payment with the other defendants of the money laundering. That was the sentence received yesterday by the former electricity minister Alecksey Mosquera for money laundering related to the Odebrecht case.

The sentence issued orally by the judges of the National Court of Justice, Iván Saquicela, Daniela Camacho and Marco Rodríguez, also defined three years in prison for the co-authors Marcelo Endara and Antonio Mosquera, uncle politician and father.

In the case of the ex-official of the Municipality of Quito Santiago J., who is also investigated in this case, the trial phase is suspended because he is a fugitive.

The Court said that there were the necessary elements to configure the crime and that the responsibility of the defendants had been proven.

Prosecutor’s Office accused the former minister of having received $ 1 million from Odebrecht for “managing and accelerating” contracts.

According to the theory of the case, the Brazilian company, through its Klienfeld company, made four transfers in 2008, for $ 1 million, to accounts of the offshore Tokyo Traders, which had Endara as legal representative and the former beneficiary as final beneficiary. Saquicela assured that there was no doubt that this operation took place.

When there is a dilemma between the sanction set for the crime of money laundering in two legal rules, the Court applied the favorability criterion and sentenced the three defendants based on the Law to Suppress the Laundering of Assets, in force since 2005, and included for each of the mitigating cases that modified the penalty.

In the case of the former official, the penalty was 6 to 9 years, but passed a penalty of 5, because the defense of this demonstrated mitigating factors, such as the collaboration provided in the Rehabilitation Center in which he is detained he gives Mathematics classes for interns seeking to apply for the baccalaureate exam.

His lawyer, Pablo Guerrero, said he was satisfied that the principle of favorability was accepted, but not in the penalty. He said he is sure that at the appellate and cassation stages the mitigating factors will make the penalty set lower.

The same logic was used to sanction Endara and Mosquera father, since in both cases mitigating factors such as good behavior and advanced age were taken into account.

If the Comprehensive Organic Penal Code (COIP), in force since 2014, was used, the penalties were in the range of 10 and 13 years.

2 millions of dollars is the amount of the fine that was set as a sanction against the former official. (I)