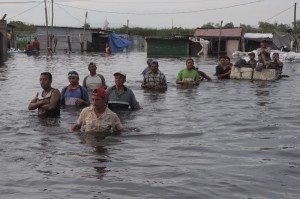 Heavy rains have caused flooding in Peru, a country that could be affected by El Niño. (Source: d24ar.com).

The presence of El Niño phenomenon in the country is a matter of concern for the International Center for Research of El Niño Phenomenon (CIIFEN for its Spanish acronym). According to Eduardo Zambrano, oceanographer at the center, this current has been forming since the previous year, in addition to heavy rains, which are inherent to this natural phenomenon.

On the other hand, Carlos Naranjo, executive director of the National Institute of Meteorology and Hydrology (INAMHI) indicates that heavy storms in recent months “are typical effects of seasonality of the time.”

“If we look at the statistics today, the highest rainfall in the Littoral have not occurred in March, but in April,” said Naranjo, who stated that the phenomenon could arise in the future, as current rains do not have relation to El Niño.

Naranjo notes that this phenomenon has had a presence in Peru, a country that has suffered losses from floods due to ocean warming.