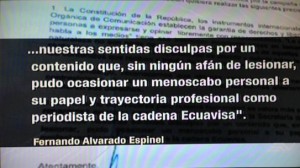 In the Monday newscast transmition of Ecuavisa, it was made a reference to the controversy by the audiovisual piece that alludes to journalist Alfonso Espinosa de los Monteros and his condition of older person.

Espinosa de los Monteros said that since Ecuavisa expressed its claim on the space called “Citizenship speaks to the media”, they have received numerous expressions of support.

“The government should see that this reaction evidences the fatigue that Ecuadorians have, we have, about accusatory government broadcasts that are often made against the media and journalists, and, I think, are turning into a boomerang for the Government itself”, he said.

Ecuavisa showed a letter that the Secretary of Communication Fernando Alvarado sent to the news anchor, in which Alvarado said: “To err is human, but our humanity is more valued if we recognize our mistakes and repair our errors, therefore, on behalf of the Ministry of communication, I offer our heartfelt apologies for a content that, without any desire to injure, could cause a personal impairment to your role and career as journalist of the Ecuavisa network”.

Espinosa de los Monteros accepted the apology but insisted that the television screen can not be used to convey insults or discrediting.

Fund Law is a priority in the Assembly