Alfonso Harb is the New President of BSC 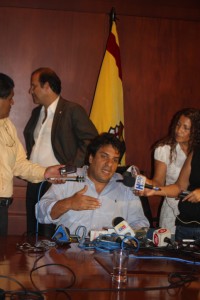 Last night, Alfonso Harb-also known as Pocho Harb-assumed the presidency of Barcelona Sporting Club (BSC) after the resignation of Juan Carlos Estrada, who  had replaced Eduardo Maruri, who resigned last Wednesday at his office.

Due to the unexpected resignation of Estrada, the board of the yellow team convened a special two hours meeting held at 16h00 at Hilton Colon Hotel.

In addition, Harb acknowledged that the sporting club has no financial liquidity at the time due to “payments made by transfers and other obligations,” but he noted that these problems will be solved” because they do efforts to obtain loans and aid from sponsors. “