Alianza PAIS does not agree with the statements of Lenin Moreno 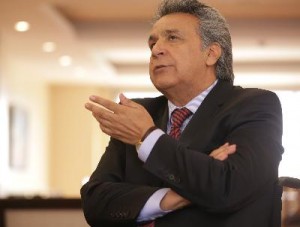 The Alianza PAIS political movement disagreed with the statements made by the former Vice President Lenin Moreno, who reiterated his disagreement with indefinite reelection, and also commented on the penalty of cartoonist Xavier Bonilla (Bonil) and the meeting of mayors and prefects in opposition to the Government in Cuenca.

“With the great affection and respect we have for Lenin Moreno, we express our disagreement with his statements, which are personal and do not respond to either politics or the efforts and daily struggles our comrade president and Alianza PAÍS must do to defend what has been achieved and build achievements as a society, and of which he has been an active part,” says the statement entitled ‘The essential struggles of the Ecuador of today’, signed by the executive secretary of the ruling movement.

The former vice president, through an interview with Diario Expreso and Ecuavisa television channel, said he does not agree with indefinite terms because “it demonstrates the inability of political parties and movements to generate leadership.” About Bonil, he recognized himself as a fan of his cartoons and expressed his disagreement about the intention the carton of Assemblyman Agustin Delgado has had to harm him in a social and human way. He further stated that from his point of view, the meeting of mayors, prefects and opposition political actors in Cuenca would not be destabilizing.