Alianza PAIS held a debate to discuss the amendments 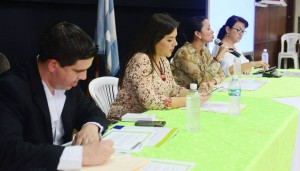 On Saturday, four assemblymen of the ruling party discussed 3 of the 16 proposed constitutional amendments in the auditorium of former employees of the National Brewery in downtown Guayaquil. About 100 people attended to the event.

The second vice president of the Assembly, Marcela Aguinaga, said the initiative of the block Alianza PAIS (AP) to push these reforms is legitimate and constitutionally permissible.

Nicolas Issa was one of the first to intervene. In his speech he referred to the amendment on public sector workers. Issa explained that in this case the ruling bloc has requested for paragraph 3 of Article 229 of the Constitution to be deleted, which stipulates that public sector workers are subject to the Labour Code and career officials to the Organic Law of Service Public (LOSEP).

“This is discrimination. The LOSEP has many benefits that the Labour Code does not. What we are looking for is an approval, to equate the rights, “he said.

Assemblywoman Gina Godoy, however, spoke about reelection. She indicated that citizenship should be the one that decides at the polls in an election situation “if it favors a new candidate or who was on duty”.

Maduro: “US has decided to accomplish the task of overthrowing my government “