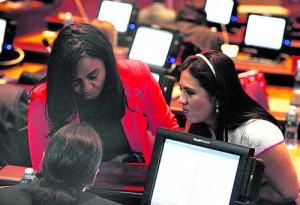 The lawmakers from the Alianza País (AP) ruling block yesterday rejected a report sponsored by the BBC, which positioned Ecuador in the category of countries in Latin America with hybrid democracies.

A report from the Economist Intelligence Unit (EUI for its Spanish acronym), conducted by the britain chain BBC News, said that Latin America “is unable to progress in democratization,” and only two countries in the region-Uruguay and Costa Rica- are rated as “full democracies.”

The study ranks countries into four categories: those with “full democracies,” “flawed democracies,” those that have “hybrid” models and “authoritarian regimes.”

Assemblywoman Alexandra Ocles explained that the parameters established for this study must be analyzed, according to her, it does not respond to the reality of the country. She said it is necessary to look at the changes the country has taken.