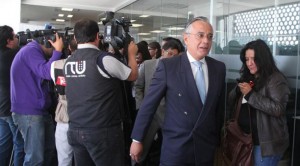 On Friday, the Constitutional Court (CC) approved 16 of the 17 amendments submitted by Alianza País, which are processed by the National Assembly. However, other proposals were sidelined. The second package of constitutional changes is currently being analyzed, said Alexis Mera, Legal Secretary to the President.

Mera said yesterday that only technical, “non-political” issues will be included in this proposal, but these are still in analysis within Alianza País and will be raised “in the coming days.”

This package includes the amendments that were not in the first set, as the inclusion in the Constitution of the State’s right to participate in surplus, raised by the President, the power for indigenous communities to sell their ancestral knowledge and the extension of the control power and political judgment of the assembly.

Furthermore, Compromiso Ecuador, composed of over 40 organizations among which Creo and La Concertación stand out, will go today to the National Electoral Council to request the forms and begin collecting signatures to propose a query to reject the amendments. From 09:00 they will gather at the rostrum of los Shyris avenue, place were they will start marching towards the CNE.