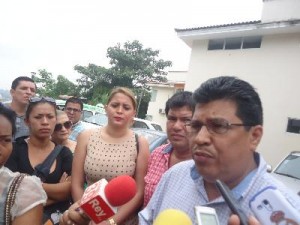 It all started when six councilors -out of a total of nine members that are part of the Council- decided days earlier period to cut the functions period from five to one year, of the  Deputy Mayor of Quevedo, Humberto Alvarado (Avanza), who is the brother of the SECOM holder, Fernando Alvarado.

With this background, the secretary of the SECOM moved to Quevedo on Tuesday to meet with the AP councilors (Angel Mora, Irene Massuh Cesar Quiñonez Litardo and Marcia), at the Community Surveillance Unit of the Police.

There, according to Angel Mora (AP), the government official would have claimed this decision, while he allegedly intimidated them to not vote for the ordinance of parliamentary procedure. “He told us that it was something personal, because it affected his brother”. According to Mora, the official said, “he would chase us, particularly me, who is on his list”.

Mora questioned the attitude of Fernando Alvarado and said that whatever happens will be the responsibility of him (Alvarado). “I will not allow myself to be intimidated and I will submit a report to the prosecution because he threatened my personal integrity”, he said.

For his part, Fernando Alvarado confirmed that he met with the council in a detachment of of the Quevedo police, “as a member of the movement, not as the press secretary. It was a business meeting, internal, private. I must not pronounce to show respect for my own peers”.

If Parliamentary Procedure Ordinance, is ratified as it stands, in a new session of the council, without the observations submitted by Mayor Jorge Dominguez, Deputy Mayor Humberto Alvarado, he would have to leave his appointment the next year and choose a new second authority.