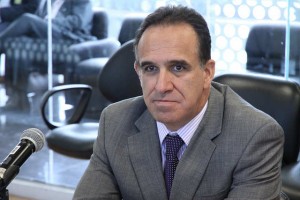 The government political party Alianza PAIS (AP) will request a “judical confession” to Ramiro Gonzalez, former Minister of Industry and former IESS chairman (Ecuadorian Institute of Social Security) in this government. This was announced by that political group, through a statement.

According to Doris Soliz, executive secretary of AP, that legal action is because Gonzalez committed “slander” when indicating that the group received “funding from the Group (of brothers William and Roberto) Isaias,” former owners of the extinct bank Filanbanco.

Soliz said they will demonstrate that “it is a fallacy and a very serious slander” that will not tarnish the AP management neither that of President Rafael Correa.

The leader of the movement mentioned they have fought “the abuses of the Isaias economic group, partial drivers of the banking crisis. They could not have financed the election campaign of Alianza PAIS.”

Marches for and against the government took place in Quito