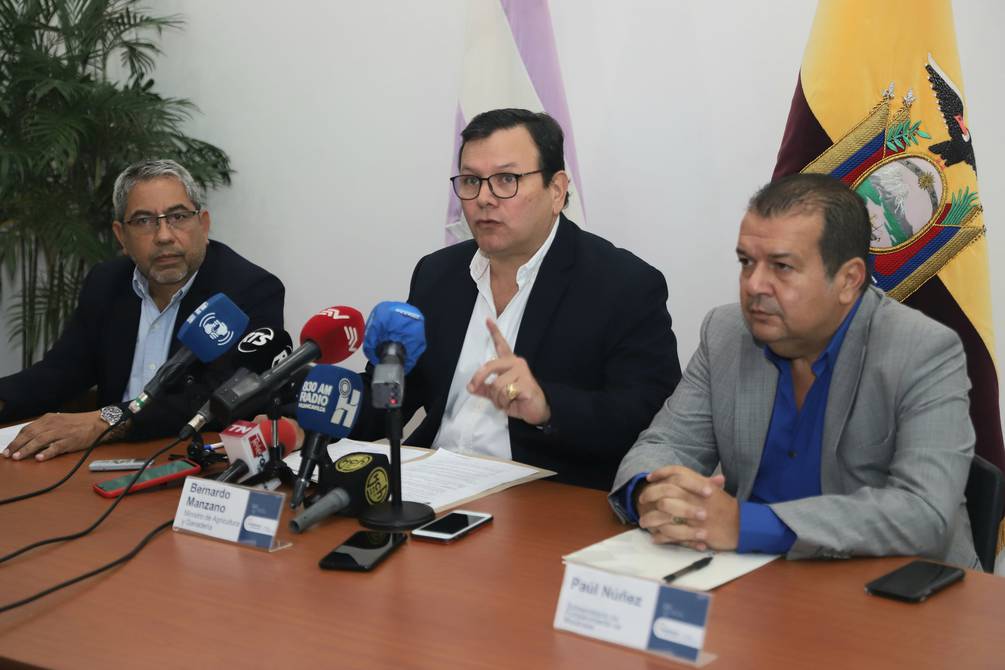 The Minister of Agriculture and Livestock, Bernardo Manzano (C), expects the new system for registering banana exports to be operational in 90 days. He also announced the start of audits to all exporting companies to verify the payment of the official price of the fruit.

This system is responsible for managing the entire banana process. There, the records or inscriptions of producers, producing farms, marketers, associations and exporters are made, as well as the contracts for the sale of the fruit, lease contracts. It also contains a database of exports carried out each week, linked to the Ecuapass system (customs system that allows export and import operations).

According to Manzano, through an audit carried out by five technicians from the German Technical Cooperation (GIZ), and around 35 from the Ministry, significant shortcomings were found in the system.

“GIZ is telling us that the system does not have backups if it goes down, that it is easy to manipulate it, that the operating system is obsolete (it used Windows 2003), that there are no records, in cases where they enter we do not know who enters and also that there are to change the server”, revealed the minister, who maintained that in the meantime the team of the Undersecretary of Musaceae will check that there are no anomalies until a new system is in place.

In this regard, Manzano explained that the tender for the new system will be launched this month and he hopes that it will come into operation in 90 days. “Because correcting the current one is more complicated and more expensive,” he assured.

Meanwhile, he reported that from this Tuesday the MAG will begin to review ex officio compliance with the official price of a box of bananas, which for this year stands at $6.25. This is because they have not received enough complaints from the producers.

“We have received very few complaints from producers for fear of any retaliation, therefore this ministry decided to investigate and audit the companies,” announced Manzano, who said that there are 245 exporting companies and 15 associations, a total of 260; and that since his arrival at the MAG the price paid for a box of fruit, which was an average of $1.80, has risen to $5 and $5.50.

“We are committed to continuing to press so that the official price is met, the audits will be carried out on all exporters without exception,” said Manzano, who warned that the sanctions will be monetary, which can range from 25 to 50 times more than the amount of the damage. for non-compliance, depending on the number of boxes or the value they have paid. Other sanctions can reach the partial suspension, for 15 days, or the definitive one and the closure of the exporter.

Regarding the strike announced by the banana producers of the province of El Oro for June 13, Manzano assured that they have been in constant communication with the banana leaders, which has led to the repeal of Decree 183 to prohibit new plantings of new banana plantations and Decree 1127 was reformed to eliminate the double qualification of packing plants, a request from the sector.

He added that they are going to call a Consultative Council to review the cost chain and FOB prices. “We are going to make a comparison with Costa Rica, with Colombia, to see how we are compared to them,” said Manzano, who added that between Wednesday and Friday of this week they will start with the payment of banana bunches affected by black sigatoka. However, regarding the producer sector’s request for a trust for the purchase of bunches due to the impact on exports due to the conflict between Russia and Ukraine, he did not give details and stated that the current aid is only for the areas affected by the plague.

“We are also working on the bidding for technological packages for small producers on the subject of nutrition and phytosanitary control, we have been working on all of this,” said Manzano, who added that debts with BanEcuador will also be rescheduled. (YO)