Alleged payments of retirement pensions to former officials, which exceed the limits, are denounced 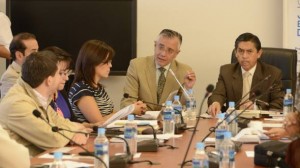 Payments for retirement pensions of up to $ 1,200 per month that are being made to some former officials of thepublic sector would transgress the limits set in the constitutional mandates 2 and 8, and executive decrees 1701 and 225, said the Legal Secretary of the Presidency, Alexis Mera. The limit amount, according to the rules, would be $ 550.

Mera, in a statement to the chairman of the board of the Ecuadorian Institute of Social Security (IESS for its Spanish acronym), Victor Hugo Villacrés, said that “in amazement and disgust he has been able to know” about these payments that constitute “a flagrant violation” of the cited rules.

Villacrés told to newspaper El Universo that at the time, the Comptroller General performs a special examination about the request of Mera and the application of sanctions will depend on the conclusions of the investigation.