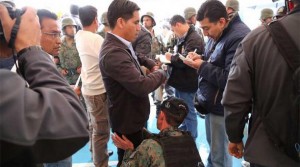 The lunch scheduled for today, in the main square of Tabacundo, was interrupted by an attack threat, so guests, following the instructions dictated from a loudspeaker, had to evacuate. Instantly, a military command cornered the area.

Two persons suspected of having attempted to carry out an attack against the president were arrested, however, official data will be released in the discussion board with authorities.