Allied unions so the strike allies is also felt in provinces 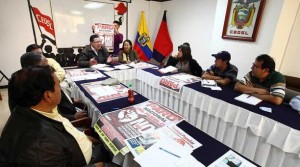 Two months ago, the United Workers Front (FUT), the Popular Front and the CONAIE called the national strike scheduled for tomorrow. The indigenous component is vital so the strike has a national sense and do not remain only as an action of labor organizations and urban sectors.

The Federation of Peasant Organizations of Azuay, the community water systems and the Provincial Union of Cañaris Communes and Cooperatives, which groups nine associations, will be the principal that will join the strike of FUT.

In Imbabura, 180 communities that will conduct their own marches in their respective communities are convened. In the central Sierra, the main force that joins syndicalism is the Indigenous Movement of Cotopaxi, the Chibuleo, Salasaca, Tomabela, Pilahuín and Quisapincha peoples. And in the Amazon, in Pastaza, the Zápara, Shuar and Kichwa nationalities will be pronounced.

And in Esmeraldas, the Single National Federation of Peasants Affiliated to the Social Security (Feunaccs) did not rule out partial road closures.

The president of the United Federation of Trade Unions of Santo Domingo de los Tsáchilas, Rolando Carrion, announced they will be represented by more than 15 social and trade unions and organizations throughout the province.

In Guayas, the situation is similar. Sit-ins were announced in different parts of the city and the Union of Associations of Retailers of Guayas is one of the groups that have joined the national strike.