Alvaro Noboa announces his support for Guillermo Lasso and challenges President Correa to “take the monkey off his back.” 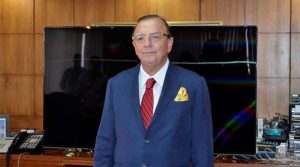 A few days before the second round of elections in Ecuador, the leader of the Adelante Ecuatoriano Adelante (AEA) party, Alvaro Noboa, announced Tuesday his support for the CREO candidate Guillermo Lasso. Likewise, he took the opportunity to call on President Rafael Correa to take the monkey off his back during a fight in the Creole way.

Through a press conference, held in his office, at the Industrial Molinera headquarters in Guayaquil, Noboa explained that he would vote for Lasso because it is the only way to end the continuity of the correism, which is represented by Lenin Moreno. He even pointed out that with the vote of the opposition the former banker will become the winner.

“Then, gentlemen, that must be the results, do not believe in the lying pollsters. The people have already decided to let Correa go! People have already voted for it and will vote this way again on Sunday,” he said.

He counted the votes obtained by opposition presidential hopefuls Guillermo Lasso (CREO), Cynthia Viteri (PSC), Paco Moncayo (ID), Abdalá Bucaram Pulley (FE), Patricio Zuquilanda (PSP) and Washington Pesantez (UP), which totaled the 57.46%, while those of the continuation line of Moreno and Iván Espinel, completed the 42.54%.

On President Correa, Noboa challenged him to a fight to smooth rough edges. “I think that before this government is finished, we should come to blows, in the Creole way, on the street everything is worth it, and I hope he could take off the monkey off his back that so much damage has caused to workers and entrepreneurs,” he said. These statements came after claiming that he has nothing against Moreno, while Correa does have something against him.