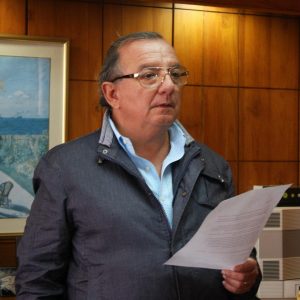 Alvaro Noboa, businessman, and leader of the Adelante Ecuatoriano Adelante party, asked voters not related to the government party to be ‘consistent’ with the option they chose in the first round of voting and support the presidential candidate Guillermo Lasso (CREO-SUMA) in the runoff elections.

“I am going to vote against the continuity, for Mr. Guillermo Lasso, and I hope that all Ecuadorians are consistent, and vote the same they voted in the first round of elections,” he said during a press conference Monday.

Noboa calculated that the votes of Lasso and five other former presidential candidates of the political opposition totaled 57.45%, and the votes of the government´s candidate Lenin Moreno (AP) and Iván Espinel (Fuerza Compromiso Social) reached the 42.54 %.

“So, gentlemen, that must be Sunday’s results. Do not believe in lying pollsters. The people have already decided to let (President Rafael) Correa go,” said the businessman.

He also took the opportunity to comment that Correa has “something personal against him” and that is why, before his term ends, they should “come to blows,” on the street, where everything is allowed.”

Any of Noboa’s legislators did not win in the past elections.