Alvaro Noboa calls for marches in Guayaquil and Quito 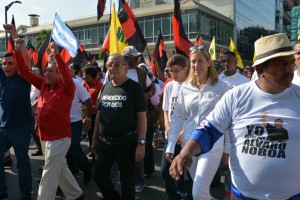 Businessman Alvaro Noboa will lead the protest march of opposition to the regime of Rafael Correa. And invites the different political parties and movements and independent citizens to join the marches of Quito and Guayaquil, on Wednesday 16 September from 17h00.

In Guayaquil, the peaceful march will start at 17:00, it will depart from Malecon 512 between the Imbabura and Tomas Martinez streets and will end in the Guayas Governor´s office.

In Quito, the protest will start at 16h00 in front of the building of the Ecuadorian Social Security Institute (IESS).

For Noboa, the aim of the protest is “to ask for a return to true democracy and the resignation of Economist Rafael Correa.” He has also said that he stands in solidarity with all groups opposed to the government as the FUT and the indigenous movements.