Alvaro Noboa challenges Correa to ‘get the monkey off his back’ 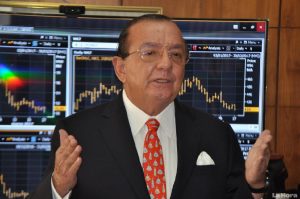 Alvaro Noboa, the leader of the Adelante Ecuatoriano Adelante (AEA) party, said that Correa ‘has something personal against him,’ after announcing that he will vote for Guillermo Lasso of the CREO-Suma alliance, to end Lenin Moreno’s continuation of Alianza Pais.

He said this during a press conference held at his office in the Industrial Molinera headquarters, in Guayaquil, where he challenged the current president Rafael Correa.

This, after claiming that he has nothing against Moreno, while Correa does have something against him. “I think that before this government is finished, we should come to blows, in the Creole way, on the street everything is worth it, and I hope he could take the monkey off his back that so much damage has caused to workers and entrepreneurs,” he said.

Earlier, Noboa showed several signs with the results of the first round of elections and stated that he and his party will vote against the continuity and in favor of the opponent Guillermo Lasso since he represents a different option with liberties.