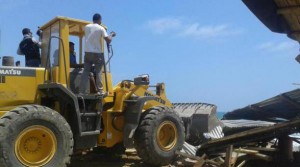 Yesterday, machinery of the governor of Guayas was commissioned to demolish dozens of meters of cement walls that surrounded the property of the VIMARE SA Company, the Merceditas Farms 1 and 2 that have belonged to the Noboa Group for over 35 years as recorded in deeds. This territory is also disputed by the Campibo SA Company, owned by Fabricio Correa, brother of the President.

The governor of Guayas, Julio Cesar Quinonez arrived to the place, together with a representative of the Interior Ministry. Both witnessed the work of the machines, and then gave a press conference in which they explained the reason for the action. According to Quinonez, the land where the Vimare project is located is ancestral. There more than a hundred community members live. The first inhabitants would have arrived 60 years ago. For this reason, the Governor offered guarantees for the population living in this territory.

For Noboa, this action against his company has political overtones. The action is attributed to an order sent by President Rafael Correa in response to his last public appearances in which the businessman and former candidate asked the resignation of the Head of State.