Dozens of supporters of businessman  Álvaro Noboa gathered outside the National Electoral Council (CNE) this Monday, November 16, 2020, to request that the registration of his presidential candidacy be processed . 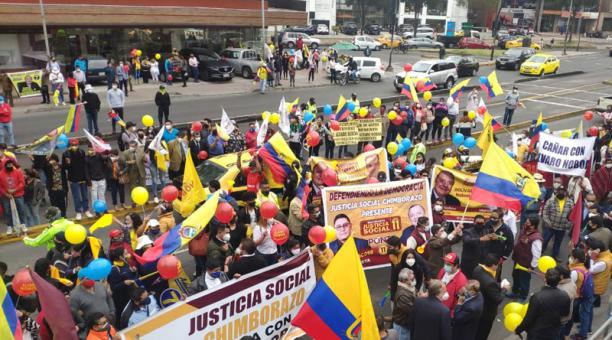 Silka Sánchez, spokeswoman for the Social Justice movement , attacked the CNE councilors and denounced an alleged attempt to leave Noboa out of the elections, in exchange for votes in the National Assembly during the political trial against the Minister of Government, María Paula Romo .

Sánchez insists that the ruling of the Contentious Electoral Tribunal (TCE), which restored legal status to Social Justice and ordered the CNE, as a measure of reparation , to establish mechanisms for the candidates of that group to continue in the electoral process ,on equal terms with other political organizations.

“I condemn an ​​investigation in exchange for the illegal inadmissibility of Álvaro Noboa’s candidacy. Check how the Creo movement will vote in the political trial against Minister María Paula Romo. The Social Christian Party (PSC) already know how to vote ”, said Sánchez.

Due to the presence of the adherents of Noboa, vehicular circulation was interrupted on 6 de Diciembre Avenue, at the height of Bosmediano Street. Some sympathizers threw eggs inside the CNE, hitting members of the press.

Sánchez dissociated himself from these events and said that “they must have been infiltrators ” who threw the eggs. “We are Alvaristas. We brought roses, “said the leader, and assured that they had already appealed to the TCE the resolution that made it impossible for Noboa to participate.

Gino Cornejo , aspiring to the Vice Presidency for Social Justice, assures that they will start a vigil to process the registration of Noboa. Both Cornejo and Sánchez indicated that it was no longer necessary for Social Justice to carry out a new primary process to elect the replacement of Fabricio Correa, who was initially going to be the presidential candidate for List 11. Before completing his registration, the brother of Former President Rafael Correa resigned from the nomination. “The party wants to prevent Noboa’s candidacy from being qualified,” said Cornejo.

Last Friday, Diana Atamaint, president of the CNE, said that the Social Justice movement failed to comply with the deadlines established in the electoral calendar, and that is why the application for registration of the Noboa-Cornejo binomial was not accepted for processing .

The plenary session of the CNE, on November 12, approved new guidelines for Social Justice to continue in the race in the 2021 elections. The body annulled a previous resolution, which granted deadlines for the group to hold primaries and register candidates.

Luis Verdesoto , proponent of the reconsideration, pointed out that the previous resolution granted benefits to Social Justice, which the rest of the political groups did not enjoy. Among them, doing primaries again, when the group did carry out those processes within the calendar of the elections. “It is not possible to replace presidential candidates by the will of the leaders of a party. The resolution of last November 5 could consecrate irregularities regarding a party sale, or an exchange of favors, “said the official.