Amazon pink dolphin in Ecuador has a natural sanctuary

In the leafy heart of the Yasuní National Park , in Ecuador, the Amazon pink dolphin has a natural sanctuary in which to take refuge from its own myth , the one that has put this freshwater cetacean in danger of extinction, for being a coveted hunting prey to attract love and, at the same time, serve as bait. 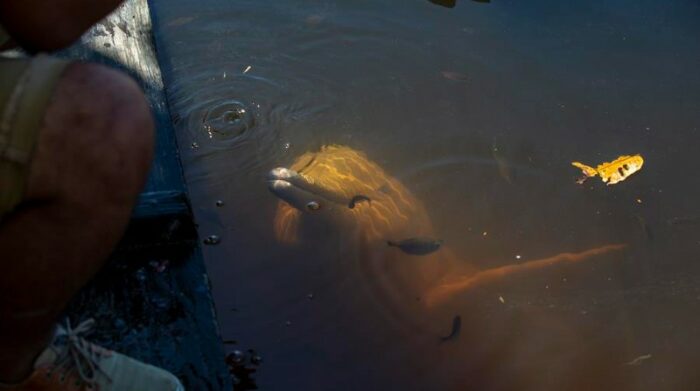 An Amazon pink dolphin is seen on May 29, 2022 in the Yasuní National Park (Ecuador).

It is at the confluence of the Cocaya and Aguarico rivers , very close to the border between Ecuador and Peru, where the paradisiacal enclave is located that allows you to appreciate the specimens of this iconic species swimming gracefully, playing and feeding even from the hand of the visitors arriving at the Yaku Warmi Community Tourism Center.

In this space of 20,000 hectares of virgin forest, run by 40 families from the community of Martinique, in the Ecuadorian province of Orellana, the pink dolphins are the kings, valued to be seen in life, and not hunted for their meat or for its butter (fat), to which aphrodisiac properties are unsustainably attributed.

Its pinkish color is its most particular feature compared to its saltwater relatives , but it also differs by having smaller eyes, shorter fins and a much longer and pointed snout to procure food from the murky waters and the muddy bed. from the river.

It also has a greater number of vertebrae that makes it easier for it to move between roots and aquatic vegetation, a body that can measure up to 2.8 meters in length and weigh 280 kilos.

Although scientifically it bears the name of “inia geoffrensis”, the pink dolphin is popularly known as bufeo or boto, and its figure is surrounded by a mystical aura, as it is part of the Amazonian cosmology whose culture is mainly shared by countries such as Brazil, Colombia, Ecuador and Peru, but also Venezuela and Bolivia.

There are numerous myths spread practically throughout the Amazon that have the bufeo as the protagonist, capable of acquiring a human appearance, either male or female, and the most popular is the one that transforms into a “gringo” man with pink skin . , robust and outstandingly handsome .

With that appearance she bursts into the verbenas of the riverside communities to seduce the most beautiful woman of the place and, with her irresistible personality and her talent for dancing, the myth tells that the woman is bewitched by that supernatural being who, in the midst of the hubbub and the music, he takes her to the river .

This fame of inveterate seducer is his downfall, as he becomes a hunted object to obtain his lard and elaborate the “pusanga”, which is sold without any scientific rigor as an almost magical ointment so that the person you like falls at your feet. while in Brazil it is also hunted to use as bait for fishing.

Added to the hunt is the environmental contamination of the rivers, especially that caused by oil spills and illegal mining, which dumps residues such as mercury into the water.

“The human is the most latent threat,” the general coordinator of Tourism of the Provincial Government of Orellana, Vinicio Gómez, confirms to Efe, who recalls that since 2019 the Amazon pink dolphin has been on the red list of the International Union for the Conservation of Nature (IUCN) as an “endangered” species.

“In the community of Martinique, where they manage the CTC Yaku Warmi, they are in this constant struggle to make a life refuge for this species,” says Gómez, presenting it as an alternative to other points in Ecuador also famous for the sighting of pink dolphins. , such as the Laguna Grande de Cuyabeno.

“This space has become one of the main tourist attractions in the province of Orellana”, highlights the official, as it is part of the “Ruta al Yasuní”, which runs through the Napo River through different communities from the city of Francisco de Orellana, also known as El Coca, to the border with Peru.

In this center you can also see the red dolphin living in perfect harmony with the Amazon gray dolphin ( sotalia fluviatilis), a species that has to live in the shadow of the charisma enjoyed by its pink relative while facing the same threats.

Likewise, you can see charapa turtles and snakes on the trunks that lean over the banks of the waterways, where various species of monkeys also walk, such as the spider, capuchin and howler monkeys, which put the wild soundtrack to this picture. raw and captivating nature of Ecuador.

Ecuador works on the exemption of the Schengen visa