Amazon women presented their “living forest” proposal to the Assembly 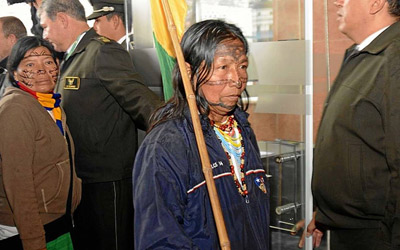 The delegation of the Amazon women, shed their spears and placed them at the entrance of the Assembly, at the request of the Guard, to enter the place. They gave to the President Gabriela Rivadeneira from AP a proposal called “living forest”, which seeks to preserve the ecosystem of that region of the country.

Patricia Gualinga, of the Sarayacu Kichwa nationality, asked the Assembly to propose the creation of an international oversight, composed by the Organization of United Nations (UN) and experts to audit the oil exploitation in the Amazon and do a deep analysis of what is happening, as well as the repeal of Decree 1247 on prior consultation because she believes is an instrument that is being used to divide and manipulate the indigenous people of the South Central Amazon.

Amazon women want their territory to be declared “life zone”, preventing the expansion of the oil frontier. “We are committed to life, not only of money; to the life of future generations, ours, to yours and the world”, said Gualinga in plenary.

Hosting the Assembly took about a week after the women arrived at the capital.

Doctors radicalized their opposition to the penalty for malpractice