Ambassador Todd Chapman was a guide for congressmen in Guayaquil 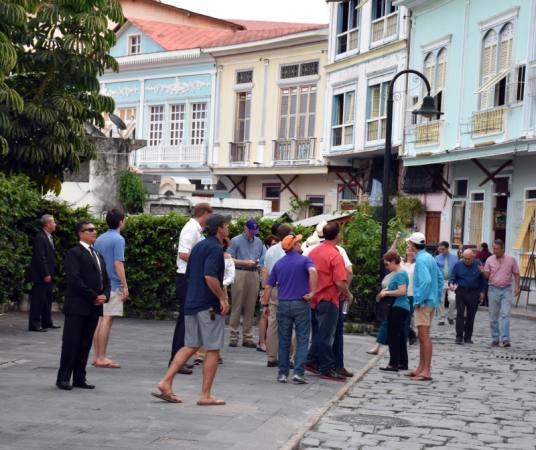 Dressed in comfortable clothes and with their cell phones to capture photos, a delegation of US congressmen toured different tourist sites in downtown Guayaquil.

Ambassador Todd Chapman and Consul Andrew K. Sherr were commissioned to act as tour guides for the representatives of the scientific, space and technology commission of the United States Congress.

The visitors went to the Rotunda Hemicycle, climbed the La Perla Ferris Wheel and toured the Las Peñas neighborhood to see the striking houses with pastel colors.

In this sector, they visited the Casa Baquerizo Moreno and observed a demonstration of the straw hat made of EcuaAndinoHats. They also learned about the history of cocoa and tasted chocolate made with fine aroma cocoa.

Part of the tourist tour of the delegates included the Seminario Park, where they did not miss the opportunity to be photographed with the iguanas that live in that place.

Several graphs of the visit were shared on social networks through the account of Guayaquil is my Destination, of the Public Tourism Company.

This delegation arrived in the country to hold meetings with the Ecuadorian authorities, in order to analyze projects that facilitate economic exchange between both countries. (I)