An earthquake of magnitude 6.1, originated in the north of Peru, was felt this noon in Guayaquil, Loja, Machala and other cities in Ecuador. 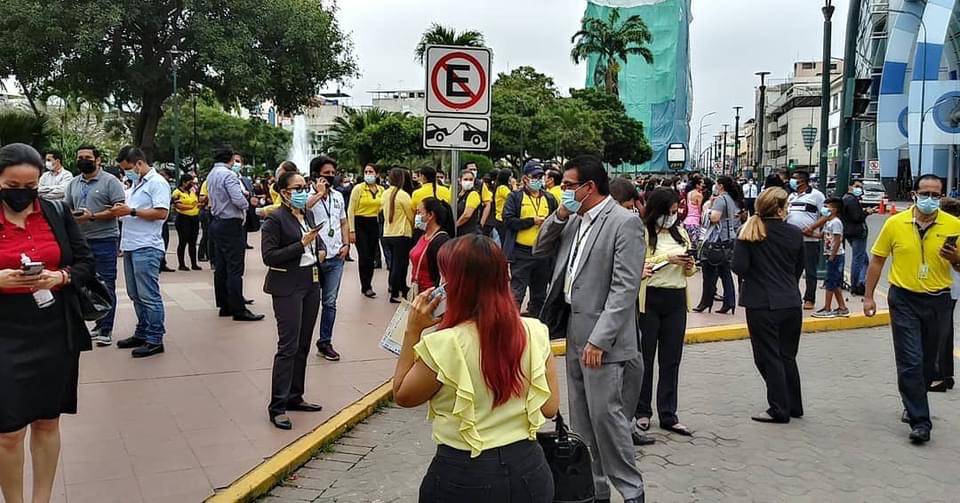 MACHALA. Citizens evacuated buildings in the center of the Orense capital.

The Geological Survey of Colombia indicated that at 12:10 the earthquake of magnitude 6.1 was reported at a depth of less than 70 kilometers in the north of Peru. In parallel, the National Seismological Center of Peru specified that the earthquake originated 12 kilometers west of Sullana, in the department of Piura.

Several citizens in Guayaquil broadcast images of the movement of lamps in their homes during the earthquake. Meanwhile, office workers evacuated buildings in the center of the city and located themselves on sidewalks and squares, such as Rocafuerte, located on 9 de Octubre and Pedro Carbo avenues.

In Loja , the inhabitants who were in their homes and workplaces took to the streets due to the shock caused by the oscillatory movement. In some schools there was a high school graduation ceremony, and the earthquake took them by surprise, however, there was no panic and they stayed in place. According to reports on social networks, the earthquake originated in northern Peru.

In social networks, citizens of the province of El Oro reported the alerts for the earthquake. Several people went out to the doorways of their homes or placed themselves in squares for fear that the movement would continue for several minutes.

“We were going to lunch and we felt that everything was moving, we went out to the street and returned to the house, but it was still shaking,” said Emilia Villafuerte, a resident of Puerto Bolívar, a town near the sea.

In Piñas and other cantons in the upper part of the province of El Oro it was felt with greater intensity, several people said that the earthquake lasted for more than a minute. The video surveillance system has not reported any material damage and no injured people.

The National Service for Risk and Emergency Management (SNGRE) indicated that the earthquake was also felt moderately in the provinces of Loja, El Oro, Guayas, Azuay and Zamora Chinchipe, and mild in Cañar and Los Ríos . In a first report, the entity detailed that no structural damage or damage to people have been generated.

Media from the neighboring country indicated that President Pedro Castillo abandoned a military act to travel to Piura after the strong earthquake.