If Venezuelans and Cubans really infiltrated indigenous people in violent protests in Quito, as the Government argues, how did they do it without the bases realizing it?

The response of Lourdes Tibán, former Assemblyman of Pachakutik, the political arm of the Confederation of Indigenous Nationalities of Ecuador (Conaie), was revealing. There is an indigenous faction that did want the fall of the Lenín Moreno government and awaits the return of Rafael Correa. 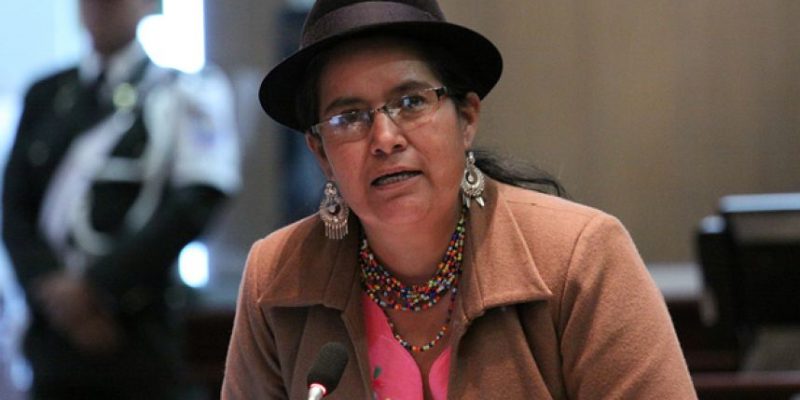 “Since Wednesday in Montúfar Street and in Guayaquil (the historic center of Quito) there were people with a foreign accent, but there were also people from Fenocín, not all of them, but they were people from Pedro de la Cruz,” Tibán revealed yesterday in dialogue. with radio City.

To that group she points out as part of the people who acted with violence. “They told me to shut up, you’re going to see that Correa is coming back. I told them: he will return but to jail and they almost hit me with a stick ”.

This newspaper tried to communicate with the former Assemblyman of the Correa movement and today an Andean parliamentarian, but his cell phone was switched off.

But it was not the only violent indigenous group, according to Tibán. On Thursday she again felt harassment in her surroundings. This time the scene was the agora of the House of Culture, where the indigenous movement concentrated to watch over the corpse of Inocencio Tucumbi, an indigenous leader of Cotopaxi who had allegedly died in clashes with the National Police.

There, while the president of Conaie, Jaime Vargas, said: Gentlemen of the National Police, join the people, do not comply with those orders of that traitor, liar, who has joined with Lasso and Nebot. To the Armed Forces, take away the support…. ”, Referring to President Moreno, Tibán saw the execution of a plan that had not been discussed in the bases. “The indigenous movement took to the streets to knock down a decree, not the Government,” he said.

Inside the House of Culture, he said, they began to follow her, to insult her, to claim her because she didn’t scream “out, Moreno” and they took pictures.

“That’s what Mrs. Ulcuango, who is from the ranks of the Indigenous Alliance, who formed Correa, as well as prepared the CDR (Committees for the Defense of the Revolution) to control neighborhoods and sectors with militarily armed people, let’s not forget. , and those people take the microphone to say that you don’t have to talk and you have to take Carondelet. ”

Understanding that the situation was out of control, the leader approached the president of the Conaie to ask him to open the dialogue.

“We talked with several leaders of the provinces and said: Gentlemen, here there will be no repeal of the decree (883) without dialogue, so we will promote dialogue.”

She said that later, Salvador Quishpe, her husband Raúl Ilaquiche and others, by delegation of the Conaie, prepared a document and gave it to the United Nations that would mediate in the dialogues, “but immediately the brokers come out saying : ‘Look, the political commission (of the Conaie) sold has just asked Lenin for dialogue.’ That is, on the other hand the correistas tried to fuck the dialogue saying: ‘these are the sold ones’ ”.

This is how the contradictory versions of a possible dialogue between the Government and the Conaie were generated.

Before the vigil, there was anger. The natives retained ten police officers and a group of journalists. And the exit of Tibán was not easy, he had to escape through a back door, in the car of the prefect of Cotopaxi towards his province, camouflaged with the cap and gompa of the bodyguard of said provincial authority.