Ancestral knowledge of older adults, at risk of disappearing due to covid-19

A great connoisseur of ancient Siekopai architecture and the creator of various infrastructures that still stand in the Wa’iya community . The other, an expert in traditional medicine and one of the last drinkers of yagé , a sacred concoction for this nationality . 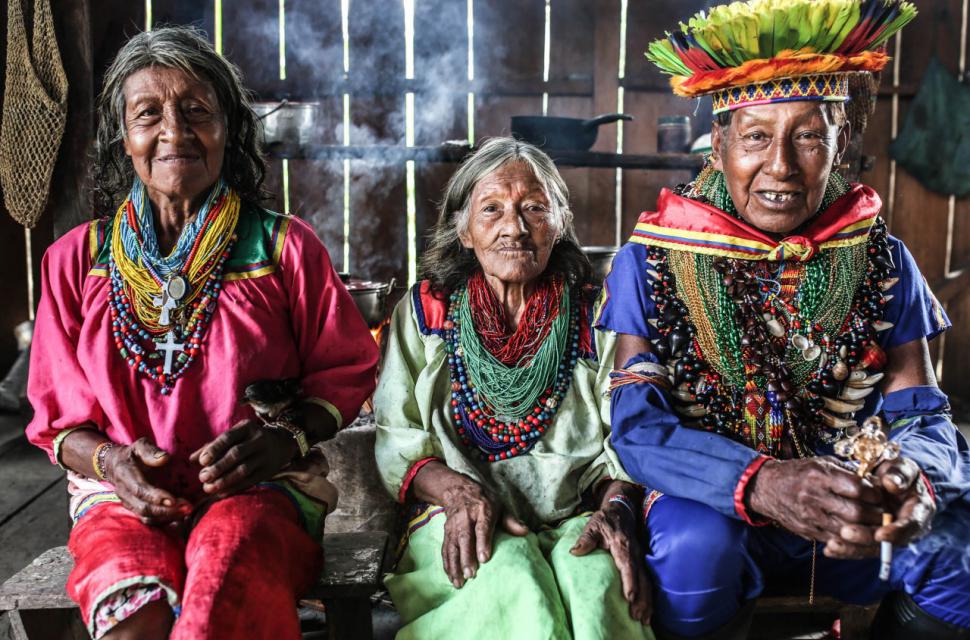 Ancestral knowledge of older adults, at risk of disappearing due to covid-19

That was the wisdom of Enrique Piaguaje and Belizario Pallaguaje , two older adults and sources of knowledge for the Siekopai Nation ( Secoya ), who died on April 14 and 19, 2020, respectively, of respiratory problems, due to a possible contagion with the covid-19.

“For us the death of our grandparents is extremely important, it is sad. Both were over 60 years old, ”says Justino Piaguaje, president of the Siekopai nationality .

Although the causes of his death have not yet been clarified, the fear that more elderly people who possess this knowledge will become ill or lose their lives motivated the transfer of many of them (about 40) to an area far from the jungle , in Lagartococoha or Pë’këya , in the province of Sucumbíos, in the Amazon of Ecuador.

And although they are already apparently safe and far from possible infections of the coronavirus, the fear for those who stayed in the communities persists.

Members of the Raíz Foundation , a non-profit organization, made a record of the number of adults over 70 years of age within indigenous communities -mainly in the Amazon-, who, like the Siekopai, are in a vulnerable situation before the new pandemic .

According to this organization, this group consists of 60 Siekopai adults, 90 of the Cofán nationality , 20 of the Siona and about 400 chachis ; the latter settled on the north coast of the country.

In addition to the serious affectations that this disease could cause in the indigenous older adults, this organism warned of the possible loss of all the ancestral knowledge that does not have any written record and that only appear in the memory of the grandparents of each community.

According to an investigation by Fundación Raíz, in the Amazon communities there is knowledge about the use of plants that only persists in the memory of older adults from various Amazonian indigenous communities.

For Jimmy Piaguaje, a Siekopai communicator, what is happening today is similar to past events in which older adults have already been at risk. “Our grandparents, in difficult times, hid in the jungle and fed there. They carry that story still. Those memories will revive them. The same story is repeated again because they cannot return to live in peace in their territories ”.

In past years, ” hiding ” in the jungle helped them survive various problems, says Piaguaje. And from those trips they have brought some of their experiences that are still known and are told now. “By escaping in the jungle, many grandparents have survived. Every time they travel, they tell their tours , and in those memories the culture lives , but the grandparents have more to say ”.

Jorge Acero, from the Amazon Frontlines organization, comments that before the health emergency in the communities, the risk of losing an entire historical review persisted if any of the wise older adults died. “The elderly are clear that they are the cultural reserve of tradition .”

Hence, Acero indicates, the fear within communities of these diseases, such as covid-19; 15 people have been infected in the Siekopai territories. “In almost all nationalities they are aware and try to prevent other comrades (even if they are from the same community) from entering their territories. Each town has its own way of healing and caring, but with a virus like this they would have to resort to the health system, because it is something unknown to them. ”

Gilberto Nenquimo , president of the Waorani nationality , shares that same fear. “Our main concern is because we do not have equipped sub-centers nearby and because of our geographical location. The elderly and grandparents of our town have a lot of vulnerability ”.

For now, indicates the Waorani leader, worry that all members of the nationality know the protocols of prevention that are unknown or alien to them. “For example, with covid you cannot make funerals , but that in my culture is a contradiction . Fortunately, there is still no Waorani citizen with covid-19 . ”

Nemo Nenquimo, leader of Waorani communities in Pastaza , insists that grandparents must be cared for because they are sources of wisdom for the youngest of the culture.

She is concerned that buyers and logging workers continue to arrive in her territories along the Curaray River , and are a risk to indigenous people . “The grandparents are experts in medicine , in shamanism and we have not recorded their knowledge . For several years they have transmitted what they know, but only orally. They are guides , wise and have accompanied us to take care of our nature . “

On April 23, 2020, the Confederation of Indigenous Nationalities of the Amazon ( Confeniae ) asked the Government for greater coordination for the distribution of funds to contain the spread of covid-19 in these territories, through a virtual meeting.

Leaders from Peru , Venezuela and Ecuador who are members of the Indigenous Organizations of the Amazon Basin ( Coica ) expressed their concern about the lack of attention in the indigenous communities of this region, to avoid the spread of the pandemic .

“It is not just that an indigenous person contracts the virus, but that a minority may disappear from the Amazon, ” says Coica’s deputy coordinator , Tuntiak Katan .

As in Ecuador, in other Amazon nationalities the risk of the virus entering and affecting the most vulnerable persists . This happened, for example, in the heart of the Brazilian Amazon where cases of covid-19 were detected among the members of the Borari ethnic group . This was reported by the newspaper El País (from Spain), on April 22, 2020.