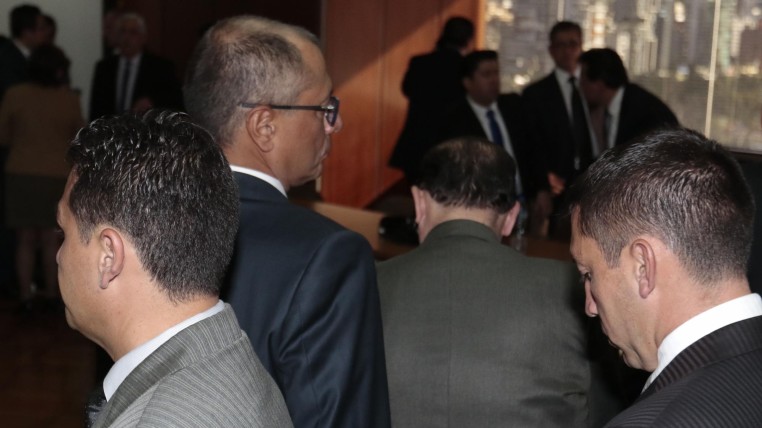 The six-year sentence for illicit association in the Odebrecht bribery scheme is not the only headache that has the vice president without functions and imprisoned in the prison 4 of Quito, Jorge Glas.

In the Office of the Prosecutor there is another case opened for bribery and two more for the Singue and Caminosca cases. But they will not be the only ones. The court that sentenced Glas and seven people for the Odebrecht case asked the Prosecutor’s Office to investigate eight crimes. The prosecutor Carlos Baca announced new processes.

And not only must defend against that. Until December 27, the vice president has a deadline to answer the predetermination of guilty civil liabilities (glosses) and submit evidence.

In what case? The agency did an examination on the termination and payment of the contract for gas exploration in the Gulf and the contract between Conelec and Machala Power. In both he found responsibilities for Glas and four people. The glosses add up to 80 million dollars and they were notified on October 14 in prison 4 of Quito.

The vice president was given 60 days to send evidence. So far, according to reports from the Comptroller’s Office, no charges have been received. And of those deadlines has more. On January 2, if he is still detained in prison 4, he could lose his position. On the second day of the year 2018, the holiday that was authorized when he entered the prison expires.

His defense appeals to all the resources that the law allows for his release. One of them is the conditional suspension of the sentence. Eduardo Franco wants his client to benefit from this possibility. Although he was sentenced to six years and the benefit can be granted when there are sentences of up to five years, Franco appealed to that alternative. The hearing will be Thursday at 10:00. In the same proceeding, a petition of Gustavo Massuh, sentenced to 14 months for the same crime, will be resolved. The problems for Glas do not end there. Suspended is the administrative resolution (dismissal) that the Comptroller notified him on October 27. That issue is in consultation with the Constitutional Court. Regarding the dismissal, sources of the Comptrollership indicated to newspaper EXPRESO that what remains is to file appeals as a review until December 27 for the sanction of dismissal and review of the gloss until February 13.

Finally, in the Caminosca case there are new features. The Prosecutor’s Office set dates for new versions and orders. One of them looks for copies of the file of the arbitration file that the Florida Court, the United States, knew between Cardno and Caminosca and the record of execution of the award.

Cardno took Caminosca before an arbitral tribunal after discovering payments of bribes to Ecuadorian public officials to obtain contracts. It was revealed by an audit. In the arbitral award several pseudonyms appeared. Among them ‘Glass’ or ‘VP’ attributed to Jorge Glas.

The investigations in the Caminosca case do not stop. The Prosecutor’s Office will receive two versions today at 09:00 and 14:30 and tomorrow and Thursday as well. In addition, the Hidrojubones Consortium was granted five days to submit the list of international suppliers.

The Comptroller’s Office confirmed the administrative responsibility of Jorge Glas on August 3, 2017. It is a fine of 5,840 (20 basic salaries). The decision comes from the report that points to irregularities and violations in the Singue case.

“Let’s appeal,” was the only thing that Vice President Jorge Glas said on Wednesday, December 13, when he was sentenced to six years in prison for illicit association in the Odebrecht bribery scheme. Glas was considered the author of the crime. (I)

Banana and shrimp, go to the Brazilian market