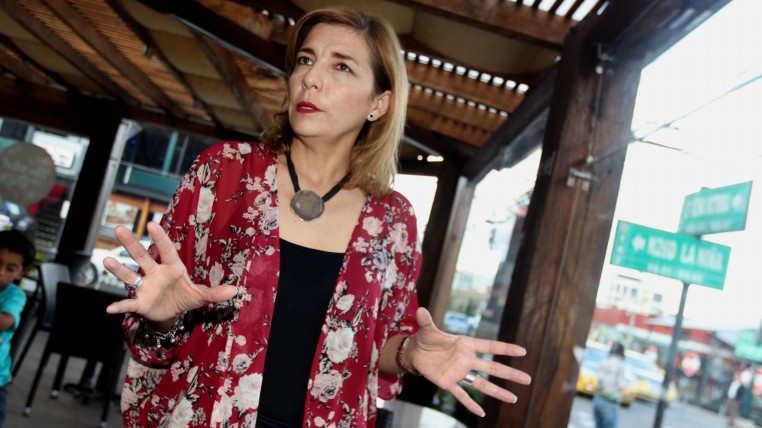 The Commission that Silvia Salgado presides over has avoided the investigation of responsibilities in cases of school sexual abuse and distanced herself more and more from civil society. Sybel Martínez explains why he does not want to endorse Aampetra’s work with his presence.

Why did you leave the Aampetra Commission?

When Augusto Espinosa came, we asked questions that nobody wanted to ask. We began to limit the use of the word. Then we worked with questions in writing, but President Silvia Salgado read some, rejected others, she did what she wanted. When the Minister of Justice came, I wanted to intervene and she left me with my hand raised. This Thursday the Minister of Health came. Then said: “We are going to give him the word even though this lady approaches the journal Expreso.” It was very derogatory, and his comment very free.

Is the Commission covering up the authorities?

I could not say for sure. The truth is that there are six members of the Alianza Pais movement and three of the opposition. And unfortunately those six of Alianza Pais have not been very diligent at the time of asking. What I do believe is that it is about dominating the Commission and the way people think or think about it  we are a piece that does not fit.

Has the Commission met its objectives?

Definitely not. Five months have passed and there is no real result. Victims have been revictimized, because there is no protocol. At some point, a child arrived. And the research to establish the dimension of this problem has not occurred. It has not been established how many children have been violated. In addition, we speak of an educational community with direct and indirect victims. That community has not been investigated.

The parents of the victims of the Aampetra Academy stopped attending for these reasons?

They were disappointed after Augusto Espinosa’s impeachment trial did not take place. Not because the head of the former minister was being sought, but because the idea was to determine who had acted wrongly by act or omission. And it has not come to that. The children have not received the psychological treatment offered or the scholarships they were promised.

The CAL inadmited the impeachment of Espinosa on the basis of a report presented by Silvia Salgado on November 13. That report has not been made public. What is its content?

On November 13, the Commission presented a different report that had clear conclusions and opened the possibility of determining responsibilities. From morning to afternoon, the report was changed to a PowerPoint presentation. The original report established the responsibilities of the Office of the Prosecutor, the Ministry of Education, the Judicial Council and the conclusion was that they had acted negligently. But that was not presented in the CAL.

Espinosa said he created inter-institutional collaboration and information gathering systems. Did they work?

The proof that they did not work is that we do not have a diagnosis that allows us to know what is really happening in the education system. If an inter-institutional committee was created in 2012, it was something. Something raised the alarm and they said: let’s do something, without attracting attention, without raising a lot of dust. Gustavo Jalkh, who is the only one who has stopped us, told us that they did have information.

Who did not have it was the Ministry of Education, or did not want it. Protocols have also failed, because it is very nice to have a protocol on the paper, a route, and another thing is to land it. On the other hand a sieve was put in the districts. It is assumed that all of us who know of a crime must report it to the Office of the Prosecutor. But the Organic Law of Education put this sieve: before you denounce in the Office of the Prosecutor, pass through the district. And the district filters the complaints: what they should know or not. That’s why there are 200 cases filed. He wanted to make us think that we had a perfect educational system.

Are there reported offenders who continue in the schools?

Denounced, no. We do not have that information. However, Assemblyman Hector Muñoz said he had knowledge of an aggressor who was teaching at a school. And something terrible is happening: we received a letter from the Prócer de Antepara school, in Vinces, where they say that the district has been given the power to elect the directors, without having cleaned up the district, when this district protected the rector who violated to the kids. We have officials who worked in the previous administration who continue talking about violence issues when they had these complaints in their hands and did nothing.

Do you think there is a policy of silence that favors the impunity of the aggressors?

Textually, no. But indeed the code of ethics, promulgated in the time of Gloria Vidal, prohibits giving the media information not authorized by the Ministry. I also believe that the Teacher Network was used to pay political fees and that perverted the system. There are 1,800 teachers who do not have a degree or experience.

Definitely not. They are not very protective and indifferent environments where anything can happen and in fact has happened. To change this we must train teachers, clean up the system, remove this culture of silence, where we protect the aggressor of our children and our children do not even listen. The Code of Children and Adolescents does not have an exclusive chapter on violence. The system of protecting the rights of our children has been dismantled in the last ten years. If you ask me, I would declare the education system in emergency.

Why do you say that the protection system was dismantled?

Specificity was lost in children’s issues. The Intergenerational Equality Council was created and the Council for Children was annulled. Today, with the law of gender violence, it is intended that the boards of protection of children’s rights also work for women’s rights. But there is no budget or investment. The prosecutor says: we need psychologists. But that costs 5 million dollars. So just violate the buses, what a shame. The same said Espinosa: mount a prevention system costs. With that excuse we do nothing. While the buses do not vote, there will be no budget.

Do you think that the technical table made up of Carondelet can straighten things out?

We will never lose hope that things are done for our children. The important thing about that table is that there are the decision makers. But I also question the fact of seeing people sitting at that table who had their complaints in their hands and put them under the carpet. (I)