Antonio Noboa presents his defense on charges of money laundering 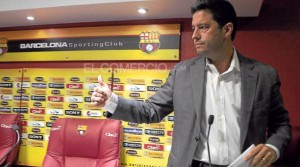 On Monday it became public an alleged crime of money laundering and according to a fiscal order, the president of the Barcelona Sporting Club, Antonio Noboa, and other executives should appear to make a statement at the Prosecutor´s Office of Guayas.

According to Edgar Escobar, coordinator of the Financial Analysis Unit (UAF), the managers of the club would have been involved in an irregular export made by the Negosupersa company, to Venezuela, for a total of USD 3 million.