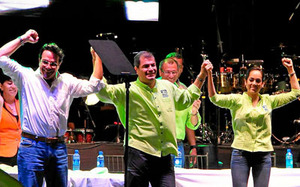 Last night, the provincial convention of Alianza Pais (AP) was carried out in the avenue 9 de Octubre, thus completely paralyzing the street, which was filled with hundreds of chairs to accommodate the supporters of the regime. In the meeting, AP announced their candidates in Guayas for the local elections of February 2014 and also to seal a deal with the movement Centro Democratico (CD), who is seeking the reelection of the prefect, Jimmy Jairala.

During the meeting the Guayas governor, Viviana Bonilla was officially proclaimed as candidate for mayor of Guayaquil. It also introduced Alexandra Arce a legislator candidate for mayor in Duran, a position that caused controversy in the process of elections in AP. The assemblywoman Denisse Robles, would seek to be the mayor of Milagro.

Regime officials also signed a partnership with CD, movement with which jointly participate in 11 cantons of Guayas, including Guayaquil, where they will give their vote to Bonilla in the ballot with the number of the list to be 35-61.