Archbishop of Guayaquil responds to criticism of Rafael Correa 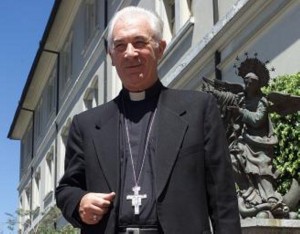 “I have never tried to favor before you a political group or a candidate for popular representation,” said the Archbishop of Guayaquil, Antonio Arregui, in a statement addressed to church members in response to the criticisms of President Rafael Correa for his comments on the dialogue process promoted by the government.

Last Saturday, Correa linked him to the former candidate for president of the CREO party, Guillermo Lasso, saying: “A little priest came out, speaking not as a pastor but as the campaign manager of the Opus Dei candidate of and then they complain of receiving political responses.”

He asserted that “the priests have no right to participate in politics,”so he warned that “every time they act like politicians, they will have to receive political responses.”

He announced that he had sent a protest letter to the Apostolic Nuncio, that represents the Vatican in the country.

In this regard, Arregui said that “if someone believes he has abused in some aspect they do well to go to my immediate superiors, who are the Pope Francis and his collaborators.”

Emergency in the cocoa sector