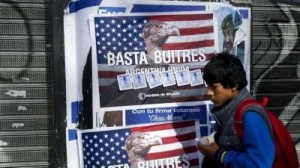 Argentina said they will attend a conciliation meeting called by the United States Justice for the trial of the so-called “vulture funds”. This is what the Ministry of Economy said, although it was stated that the hedge funds “do not want to negotiate” the debt of $1,330 million.

The meeting seeks to reach an agreement on the conviction of a New York judge who asks to pay in cash without removing the $1,330 million, corresponding to 100% of bonds held by the funds NML Capital, Aurelius and other holdouts that litigate in the New York courts.

“The vulture funds do not want to negotiate. They want to appropriate the money of the exchange holders,” said Argentina’s Economy Ministry in a statement.

“Argentina officially announced (on Monday) its decision to attend the meeting called by the ‘Special Master’ (mediator Daniel Pollack) appointed by Judge Thomas Griesa, as a clear expression of its willingness to negotiate as an act of good faith,” said the Ministry of Economy.

CAN suspends decision issued in Lima