Arrested in incident with Rafael Correa in vinces, with 5 days in jail 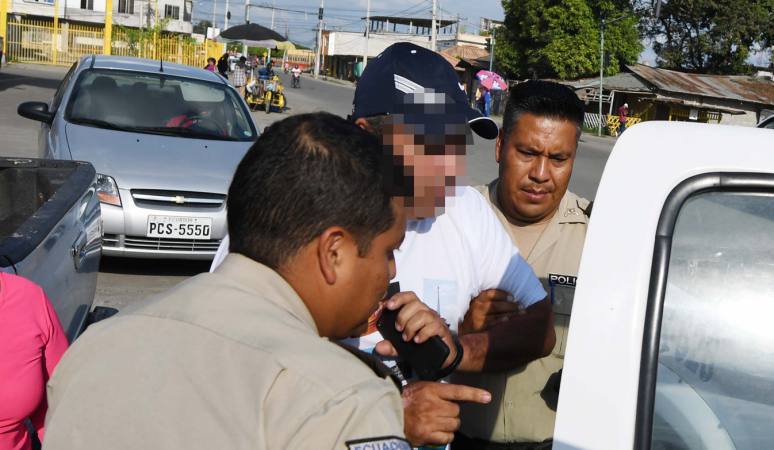 The order to knock down the door would have come directly from former president Rafael Correa. This is remembered by one of the neighbors in the La Granja neighborhood of this canton.

She asked not to be identified for fear of reprisals, because she believes that they could look for her and “make her pay” for the “audacity” of having faced him. The woman says that she went to the outside of the radio where Correa gave an interview and was expected by supporters and detractors.

When leaving, he embarked in a small truck and sang songs alluding to the No in the plebiscite on February 4. However, as in other locations, Correa received the rejection of the Vinceños with a shower of eggs. When the caravan moved through the streets Sucre and Jorge Yánez, from a roof top a group of young people threw several eggs.

“At that time Correa said he was fed up and that had to end, and got out of the car. Nobody believed that he was going to get off, but he got off surrounded by several people who had those shields used by the police, “says the woman.

Immediately, she says, the former president went to the building from where the egg were thrown  and ordered “knock the door down.” Correa, say the owners of the property, entered and climbed the stairs, but an interior door prevented him from moving forward.

“He had no right to enter and less to knock down the door, I told him that he was no longer anyone, that he was no the president and that he was now a citizen,” says the neighbor, who suffered a kick in the leg.

The owner of the house, who also requested the reservation of her name, explains that she and other relatives were leaning on the balcony of the second floor and that some young people from the neighborhood went up to the terrace. The woman said she will not file the complaint for the search; but a police official indicated that the judicial authorities analyzed this thursday to investigate the fact ex officio.

In the afternoon, the only one arrested for the incidents, Domingo A.V. A., was sentenced to five days in prison. The prosecutor, said Sgt. Wilmer Flores, considered that the individual’s action was framed in a second-class violation. The institution said , Flores expected Domingo A. V. A. to be prosecuted for the crime of attack and resistance.

The apprehended, on leaving the Judicial Unit of Vinces, said he owed “a lot to Correa” and that he was detained for allegedly defending a woman who had been beaten.

Two consulted criminals, Ramiro Aguilar and Gonzalo Silva, agree that the possible entry into force of this house in Vinces, in the case of being reported, would incur the crime of violation of private property, typified in Article 181 of the Integral Code Criminal (COIP). Aguilar added that “only an authority with a court order can enter any property.” Silva also recalled that the current Constitution establishes as part of the rights of the population the “inviolability of the domicile”. (I)

Government Ecuador responded to the iachr on question 3

Two of three countries of the can against the customs tax